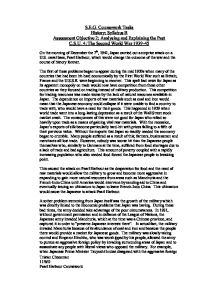 S.E.G. Coursework Tasks History: Syllabus B Assessment Objective 2: Analysing and Explaining the Past C.S.U. 4: The Second World War 1939-45 On the morning of December the 7th, 1941, Japan carried out a surprise attack on a U.S. naval base, Pearl Harbour, which would change the outcome of the war and the course of history forever. The first of these problems began to appear during the mid 1920s when many of the countries that had been hit-hard economically by the First World War such as Britain, France and the U.S.S.R. were beginning to recover. This spelt bad news for Japan as its apparent monopoly on trade would now have competition from these other countries as they focused on trading instead of military production. This competition for trading resources was made worse by the lack of natural resources available in Japan. The dependence on imports of raw materials such as coal and iron would mean that the Japanese economy could collapse if it were unable to find a country to trade with, who would have a need for their goods. This happened in 1929 when world trade went into a long-lasting depression as a result of the Wall Street stock market crash. ...read more.

the League, had stood up to them when invading countries before and so they believed that they would not encounter much retaliation from the League if they were to attack Pearl Harbour. Before Japan had begun to advance south into China and French-Indo China it encountered Soviet resistance from the north. While the U.S.S.R. and Japan had been enemies for years beforehand, they had not fought for many years. However, when Japan invaded the Chinese province of Manchuria, the Soviet Union became suspicious of their long time enemies. It seemed to the Soviets as if Japan was positioning itself for an all out invasion of the U.S.S.R. Eventually there were two border skirmishes in 1938 between these two nations, both of which Japan lost due to the brilliant Russian General Zhukov who caused the Japanese to surrender. This then led to the attack at Pearl Harbour as the Japanese military was unable to expand north and therefore had to move south-west into other areas which brought it closer to Pearl Harbour. As it came closer to the American interests, the Americans became worried that they could continue to invade countries that America had sworn to protect such as the Philippines and so it placed a fuel embargo on the Japanese. ...read more.

While we will never know if he planned to do this, one thing is certain; his ultimatum about the fuel embargo forced the Japanese to either back down to America and leave Indo-China or to find oil from somewhere else. Japan decided on the second option and decided to invade the oil rich Dutch East Indies; however, this would also mean having to knock out any resistance that they might encounter from American fleets stationed at Pearl Harbour. So, in conclusion; yes, there was more than one reason for the attack on Pearl Harbour. While Japan did think that one fatal attack would knock America out of the Pacific and allow them to take oil from the Dutch East Indies, this was not the only cause. The causes vary from the long-term problems of Japan itself such as the Economy, Military Growth as well as the failure of the League of Nations which led to the Japanese expansion and eventually to the tripartite pact. As Japan expanded they were helped by the fact that the colonial powers were weak and so invasions of certain countries were easy. Due to the fuel embargo placed by America on Japan, Anti-Americanism grew and with Japan invading south due to the loss against the U.S.S.R. an attack on Pearl Harbour became more likely. Tristan Cheesman 11WD Pearl Harbour Coursework ...read more.