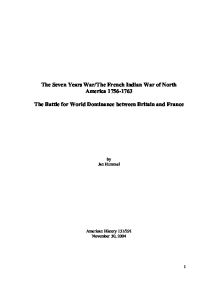 The Seven Years War/The French Indian War of North America 1756-1763 The Battle for World Dominance between Britain and France by Jan Hummel American History 131/291 November 30, 2004 The Seven Years War was the first major world war and a critical part of American History. The war was fought not only in North America, but also in Europe and India with Britain, Hanover, and Prussia fighting against France, Austria, Russia, and Spain. Britain and France struggled to gain land in these countries and fought for the ultimate world power. In North America this war is referred to as the French and Indian War. It, just like the wars in Europe, was a major struggle between Britain and France to control land. Each country knew gaining the vast majority of the land in North America would attain them world dominance they were struggling to achieve. Each country also knew that gaining the support of the Native Americans to fight on their side would win them the war. ...read more.

Even with their short supply of soldiers the war looked good for France. The French and Native Americans together captured Fort Oswego on Lake Ontario in 1756 and took Fort William Henry on Lake George in 1757. In 1756 King George had assigned William Pitt as First Minister of Britain knowing he would stop at nothing to capture America. The war looked bad for Britain and they seemed to be getting crushed from all angles, until two major turn of events happened. The Native Americans feared the French were gaining too much of an advantage in North America. At the treaty conference in Easton, PA in 1758 they officially withdrew their support for the French. Pitt knew he did not have the man power to send more troops to North America and made a deal with the colonists. He asked them to fight for the British army and in return Britain would accept the financial burden of the war. ...read more.

When the French refused their homes and villages were burned leaving them no place to go and very minimal personal belongings. Many of the French were sent to areas in Maryland and Pennsylvania, but most tried to move down to the Louisiana Territory. The Native Americans did not realize when they fought along side the British that soon after the war the British would be taking their own lands right out from under them. The Colonists also did not realize Britain would turn on them after the end of the war. Britain had agreed to take on the financial burden of the war in return for Colonial soldiers, but soon after began imposing tariffs and taxes on the Colonists to regain some of the money they lost during the war. Fighting together during the war really pulled the Colonists, Native Americans, and the British together, but any camaraderie that was gained was quickly replaced by tensions and hostilities that arose shortly after the end of the war. These tensions and hostilities ultimately lead this country into the Revolutionary War and the Colonists break away from British authority. ...read more.