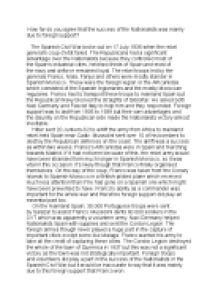 The Spanish Civil War. How far do you agree that the success of the Nationalists was mainly due to foreign support?

﻿How far do you agree that the success of the Nationalists was mainly due to foreign support? The Spanish Civil War broke out on 17 July 1936 when the rebel general's coup d'etot failed. The Republicans had a significant advantage over the Nationalists because they controlled most of the Spain's industrial cities, held two thirds of Spain and most of the navy and airforce remained loyal. The rebel troops led by the generals Franco, Mola, Fanjul and others were mostly stander in Spanish Morocco. These were the foreign legion or the Africanistas which consisted of the Spanish legionaries and the mostly Moroccan regulares. Franco had to transport these troops to mainland Spain but the Republican Navy blocked the straights of Giblortar. ...read more.

Franco's ability as a commander was important for the whole war and therefore foreign support did play an essential part too. On the mainland Spain, 30.000 Portuguese troops were sent by Salazar to assist Franco. Mussolini dents 60.000 soldiers in the CVT which was apparently a volunteer army. Nazi Germany helped Nationalists Spain with supplies and sent the Cordon Legion. The foreign armies though never played a huge part in the capture of important cities except some like Malaga. Franco wanted his army to take all the credit of capturing these cities. The Condor Legion destroyed the whole of the town of Guernica in 1937 but this was not a significant victory as the town was not strategically important. Foreign troops and volunteers did play a part in the success of the Nationalists in the Spanish Civil War but it would be inaccurate to say that it was mainly due to this foreign support that Franco won. ...read more.

The Republicans did not have the military advantage that the Nationalists had which was to have core and expended Africanistas. To say that the success of the Nationalist was mainly due to foreign support is wrong, because the soldiers who fought on the ground were the main reason of their victory, but we also can't reject the fact that military equipments played a huge part as well. That's also was a reason why Republicans didn't win, because Soviet Union had worse military equipment than Germany and Italy. As well Russians always were asking Republicans to repay the loans as soon as possible, while Germany never put so much much pressure on Nationalists. As I wrote earlier there were disputes between Republicans themselves. So if we were looking at all the reasons why the Nationalists won, the reason of foreign support would be on of the main reason. ...read more.