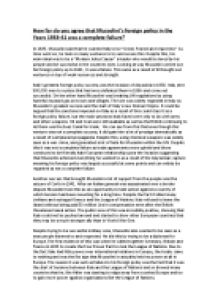 How far do you agree that Mussolinis foreign policy in the Years 1933-41 was a complete failure?

﻿How far do you agree that Mussolini?s foreign policy in the Years 1933-41 was a complete failure? In 1925, Mussolini said that he wanted Italy to be ?Great, Feared and respected.? As time went on, he took on many ventures to try and secure this. Despite this, his main ideal was to be a ?Modern Julius Caesar? a leader who would be loved by his people and be successful in the countries eyes. Looking at way Mussolini carried out his foreign policy up to 1941, it was a failure. This came as a result of ill thought out ventures on top of weak resources and strength. Italy?s greatest foreign policy success was the invasion of Abyssinia in 1936. Italy sent 500,000 men to a place that had once defeated them in 1896 and come out successful. On the other hand Mussolini was breaking UN regulations by using harmful mustard gas on towns and villages. The win was widely regarded in Italy as Mussolini?s greatest success and the start of Italy?s new Roman Empire. ...read more.

After an Italian general was assassinated over a border dispute Mussolini took this as an opportunity to take action against a country of which tension had been mounting for a long time. Despite the fact it killed many civilians and outraged Greece and the League of Nations. Italy refused to leave the island without being paid 50 million Lira in compensation even after the British threatened naval action. The public view of this was incredibly positive, showing that Italy could not be pushed around and started to show other European countries that they may be a much stronger ally than in World War One. Despite trying to be successful military wise, Mussolini also wanted to be seen as a man people listened to and respected. He did this by trying to be a diplomat for Europe, The first evidence of this was when he called together Germany, Britain and France in 1933 to create the Four Power Pact to rival the League of Nations. Due to the fact Italy had little power over international relations in Europe; the treaty came to nothing and was the fist sign that Mussolini in actuality held no power at all in Europe. ...read more.

On top of this it further strained relationships with Britain and France, as Italy got closer to an German Alliance. Mussolini was pushed for allies in the run up to World war two and Mussolini had only two options, Spain, (a country still recovering from a debilitating civil war) or Germany, the strong industrialised super power of Europe. Mussolini had certainly improved Italy?s military presence since the Liberal State, but unlike his foreign policy goals, Italy more often than not was seen as an after thought rather than a big player. As well as this, in terms of his love from the people, it was substantial but a lot of the prestige that he gained after these events mainly came from successful propaganda rather than decisive and strong victories. This meant that his government was standing on a very unstable support. This shows definitively that Mussolini?s foreign policy was a failure due to the fact that however well the propaganda marketed these ?victories? to the German people, Mussolini did not have the resources, industry or leadership to become the feared and respected Nation that he and the rest of the country wanted. ...read more.