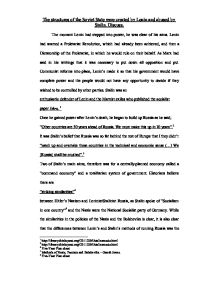 The structures of the Soviet State were created by Lenin and abused by Stalin. Discuss.

The moment Lenin had stepped into power, he was clear of his aims. Lenin had wanted a Proletariat Revolution, which had already been achieved, and then a Dictatorship of the Proletariat, in which he would rule on their behalf. As Marx had said in his writings that it was necessary to put down all opposition and put Communist reforms into place, Lenin's made it so that his government would have complete power and the people would not have any opportunity to decide if they wished to be controlled by other parties. Stalin was an enthusiastic defender of Lenin and the Marxist exiles who published the socialist paper Iskra. 1 Once he gained power after Lenin's death, he began to build up Russia as he said; "Other countries are 50 years ahead of Russia. We must make this up in 10 years".2 It was Stalin's belief that Russia was so far behind the rest of Europe that I they didn't "catch up and overtake these countries in the technical and economic sense (...) We [Russia] shall be crushed".3 Two of Stalin's main aims, therefore was for a centrally-planned economy called a "command economy" and a totalitarian system of government. ...read more.

level".15 While this was great for Russia, it was abandoned by Stalin in favour of his new Five-Year Plan. Referring back to Stalin's belief that Russia was so far behind the other countries in Europe, it was his hope that the introduction of the five-year plan would mean that the USSR's industrial base would reach the level of capitalist countries' in the West, to prevent them being beaten in another possible war. 16 Though many of the Bolsheviks were against the New Economic Policy as it was seen as a "betrayal of communist principles",17 Stalin's change of heart after the 'war scare' and his reasons behind the five-year plan helped to convince many of them that it was a great idea. Stalin's aim for the plan was for it to be "the transformation of the country from an agrarian into and industrial one, capable by its own means of producing the necessary equipment".18 Stalin had specific targets of output which workers were expected to achieve and because of Stalin's government backing and force, punishments would be doled out should any targets not be met. ...read more.