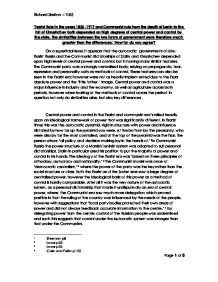 'Tsarist Rule in the years 1856-1917 and Communist rule from the death of Lenin to the fall of Khrushchev both depended on high degrees of central power and control by the state. The similarities between the two forms of government were therefore much greater than the differences.' How far do you agree? On a superficial level, it appears that the autocratic governments of late-Tsarist Russia and the Communist dictatorships of Stalin and Khrushchev depended upon high levels of central power and control, both having many similar features. The Communist party was a strongly centralised body, relying on propaganda, fear, repression and personality cults as methods of control. These features can also be seen in the Tsarist era; however were not as heavily implemented due to the Tsars absolute power and the 'little father,' image. Central power and control was a major influence in industry and the economy, as well as agriculture across both periods, however when looking at the methods of control across the period in question not only do similarities arise, but also key differences. Central power and control in the Tsarist and communist era's relied heavily upon an ideological framework of power that was significantly different. In Tsarist times this was the autocratic pyramid, rigid in structure with power and influence dictated by how far up the pyramid you were. At the bottom lay the peasantry, who were also by far the most controlled, and at the top of the pyramid was the Tsar, the person whom 'all policy and decision making lay in the hands of.'1In Communist Russia the power structure of a Marxist/Leninist system was adapted to suit personal dictatorships. ...read more.

'At its introduction in 1928, Stalin claimed that it was the free choice of the peasants, but in practise it was enforced on a very reluctant peasantry.'13 This forcing of an untested agricultural method onto the country showed one of the highest degrees of centralised power and control in action. Other plans that came directly from the Soviet leaders can also be used to show central power and control in action. Khrushchev's disastrous Virgin Land scheme, his personal plan to save Russian agriculture, and the plan that ultimately led to his removal from power, showing that unlike the Tsars the leaders of the communist party were replaceable and that power was much more widespread. Lee summarises Russian agriculture in that 'The problem was that state control over agriculture never really worked. In a country the size of the Soviet Union there were too many variations in climate, local conditions and social customs for centralisation to be anything other than a disincentive to production.'14. When considering how much agriculture was a method of central power and control, it is fair to suggest that through personally implemented plans, both eras saw a high element of personal control to varied levels of success from autocrat and dictator alike. Another method of control was the rise in personality cults formed around the Russian leaders, cults that gave the Russian people delusions that the leaders were of a higher, almost godlike status. Stalin can be quoted as saying 'The people need a Tsar, whom they can worship and for whom they can live and work,'15 suggesting that the similarities between the cult of personality and the 'little father' principle were intended to implement a similar level of control. ...read more.

In soviet Russia the police state became the method of control and removed the need for the army. To conclude, it is undeniable that both eras saw a high degree of central power and control. The very nature of the Tsarist autocracy relied upon the greatest degree of power to be held by the Tsar, the central power. The soviet method too called for a strong central force to control the country, even if this was through planning agencies and economic councils as these bodies were centrally monitored. However the question of whether these eras saw more similarities than differences is far less clear cut. Whilst the Tsarist and Soviet eras are directly comparable on many social, economic and political levels the nature of these comparisons sees many differences in the approach and method of control. Whilst both eras saw the use of fear and repression, the actions of the Okhrana cannot be put on par with those of the NKVD. The use of religion as a method of control can be found in both eras however whilst the autocratic rulers found using the church as an opportunity to preach propaganda, the Soviets saw oppressing religion a far more useful method. Industrial and agricultural development over both eras saw a great deal of central influence, and with policies such as emancipation under the Tsars or collectivisation under the soviets as well as the five year plans and Witte's industrial policy, they too could be seen as comparable methods of control. When considering all of the evidence even though some areas show stark differences, in the majority of cases the soviet method of control was more of an extension of Tsarist ideology than a completely new and different method. For this reason it can be said that the similarities between the two forms of government are indeed greater than the differences. ...read more.