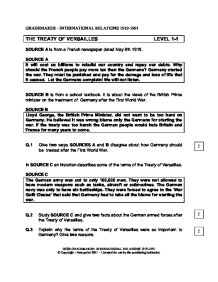 THE TREATY OF VERSAILLES

THE TREATY OF VERSAILLES LEVEL 1-1 SOURCE A is from a French newspaper dated May 8th 1919. SOURCE A It will cost us billions to rebuild our country and repay our debts. Why should the French people pay more tax than the Germans? Germany started the war. They must be punished and pay for the damage and loss of life that it caused. Let the Germans complain! We will not listen. SOURCE B is from a school textbook. It is about the views of the British Prime minister on the treatment of Germany after the First World War. SOURCE B Lloyd George, the British Prime Minister, did not want to be too hard on Germany. He believed it was wrong blame only the Germans for starting the war. If the treaty was too harsh the German people would hate Britain and France for many years to come. Q.1 Give two ways SOURCES A and B disagree about how Germany should be treated after the First World War. In SOURCE C an historian describes some of the terms of the Treaty of Versailles. SOURCE C The German army was cut to only 100,000 men. They were not allowed to have modern weapons such as tanks, aircraft or submarines. The German navy was only to have six battleships. They were forced to agree to the 'War Guilt Clause' that said that Germany had to take all the blame for starting the war. Q.2 Study SOURCE C and give two facts about the German armed forces after the Treaty of Versailles. Q.3 Explain why the terms of the Treaty of Versailles were so important to Germany? Give two reasons THE LEAGUE OF NATIONS LEVEL 1-2 In SOURCE A an historian writes about the American President Woodrow Wilson who came to Europe in 1919. SOURCE A President Wilson's plan for a League of Nations had much support. ...read more.

Q.1 Study SOURCE B. Why does the writer suggest atomic weapons are of limited value? Give three reasons. SOURCE B is from 'The Cold War 1945-70', published 1978. SOURCE B The new Soviet leader Nikita Khrushchev fiercely criticised West German rearmament and complained loudly about the warlike policies of NATO. In May 1955 he signed the Warsaw Pact which created a military group of Eastern Bloc countries to provide mutual defence for the communist states. Q.2 Study SOURCE A. Explain why the Warsaw Pact Alliance was set up? Give two reasons. SOURCE C is from a school history book. It shows the military strengths of NATO and Warsaw Pact forces in 1965. SOURCE C ALLIANCE COMBAT TROOPS TANKS AIRCRAFT ATOMIC WARHEADS NATO 1,200,000 10,050 2,850 7,000 WARSAW PACT 1,260.000 26,500 5,250 3,500 Q.3 Study SOURCE C. Compare the military strength of the two alliances. THE BERLIN CRISES LEVEL 1-7 SOURCE A is about the Russian attempt to force the Western allies out of Berlin by blockading the city in 1948-49. SOURCE A The airlift went on for almost a year. At one time planes were landing at the rate of one every 45 seconds. The allies even used flying boats that landed in the city's boating lakes. Over 280,000 flights were made to deliver 25 million tons of food and supplies to the city. Q.1 How can you tell from SOURCE A that the allies were determined to beat the Russian blockade? Give two ways. SOURCE B is about Berlin after 1949. SOURCE B Between 1949 and 1961 over 3 million East Germans escaped to West Germany through West Berlin. This was embarrassing to the East German government. It also damaged the economy, as many of those who left were skilled workers. To stop people leaving the East Germans built a wall of barbed wire and concrete through the center of Berlin. Q.2 Study SOURCE B only. ...read more.

1972 Biological Warfare Treaty - agreement to ban biological weapons. 1972 Strategic Arms Limitation Treaty - limit on US and Soviet long-range nuclear missiles . Q.3 Give three examples from SOURCE C which show that the super-powers were trying to reduce the tensions caused by nuclear weapons. THE COLLAPSE OF COMMUNISM LEVEL 1-12 SOURCE A is from a school textbook written in 1997. SOURCE A The Soviet Union was in serious trouble when Gorbachev came to power in 1985. The economy was in decline and Soviet troops were bogged down in a costly and unpopular war in Afghanistan. Ordinary Soviet citizens faced shortages of food and consumer goods. They often had to spend hours queuing for basic items in the shops. Q.1 Study SOURCE A only. What problems faced Gorbachev when he became the leader of the Soviet Union in 1985? SOURCE B is by a historian writing about the end of the communist system in 1989. SOURCE B Gorbachev believed the countries of the Soviet Bloc should be free to decide the type of government they wanted. He made it clear that Soviet tanks would no longer support unpopular communist governments. Within a few months the peoples of Poland, Hungary, East Germany, Czechoslovakia, Bulgaria and Romania abandoned communism. Q.2 Study SOURCE B only. Why did the communist system in Eastern Europe come to an end in 1989. SOURCE C is from a speech by a Communist Party representative in the Soviet Congress, February 1990. SOURCE C Comrade Gorbachev tells the people that perestroika and glasnost has made them free. But everyday experience tells them that criminals, gangsters and black-marketeers are the only winners in Gorbachev's so- called free society. Ordinary citizens face massive price rises and struggle to keep their families fed. For the first time in living memory the streets of Soviet cities are lined with beggars. Q.3 Give two examples from SOURCE C which show that the speaker did not support Gorbachev's policies. GRADEMAKER - INTERNATIONAL RELATIONS 1919-1991 GCSE GRADEMAKER: INTERNATIONAL RELATIONS 1919-1991 (c) Copyright - Pennyprint 2001 - Licensed for use by the purchasing institution. ...read more.