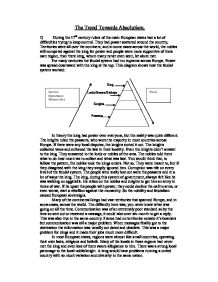 The Trend Towards Absolutism.

The Trend Towards Absolutism. 1) During the 17th century rulers of the main European states had a lot of difficulties trying to keep control. They had power scattered around the country, Territories were all over the continent, and in some cases across the world, the nobles still competed against the king for power and people were more supportive of there own region, than there king, whom many never even seen, let alone met. For many centuries the feudal system had run supreme across Europe. Power was spread downward with the king at the top. This diagram shows how the feudal system worked: King Lords/Barons/Bishops Knights Peasants In theory the king had power over everyone, but the reality was quite different. The knights ruled the peasants, who were the majority in most countries across Europe. If there were any local disputes, the knights sorted it out. The knights collected taxes and enforced the law in their locality. Even the knights didn't answer to the king. They answered to the lords or nobles of the area. The nobles told them what to do how much tax to collect and what was law. You would think that, to follow the pattern, the nobles took the kings orders. Not so. They were meant to, but if they disagreed with the king they simply ignored him. ...read more.

Louis sat on every meeting and every single decision had to be OK'd with him. This version of government was supported by Machiavelli, author of 'The Prince' 1513. 3) Bossuet's views of an absolutist government were based on religion, because he was a Bishop. He was bishop of Meaux from 1681 and he was tutor to Louis XIV son, the crown prince or Dauphin. His major work was titled 'politics derived from Holy Scripture' and was published in 1709 after his death (posthumously). In it he identified four essential aspects to the monarchy. These were: Sacred- he saw the king as a direct subject from God put on the planet to do his work. Bossuet made constant reference to the Bible and ancient Jewish kings David and Solomon. So an act against the king was seen as an act against God. He built on and furthered the Divine right of Kings. Paternal- Bossuet drew attention to the king being a father to the people. This acted twofold. He was seen as protector of the country, put there to protect the inhabitants from, invasion and internal strife. It was also a role of handing out discipline. He had to show his subjects that they could not get away with things while he was there. Absolute- this means the kings had absolute power. ...read more.

It can be said that they directed much of the French Policy, albeit indirectly Territory The Habsburg emperor Joseph II ruled over an empire of largely autonomous states which such a huge ethnic and cultural diversity that any centralised government would have had a major struggle. In these cases the absolute government was by nature very weak. New Political Thinking As a method of government, absolutism had a very short life span. By the 18th century new political thinking created a new system, and it undermined the absolute system. 9) I don't think it was possible for a king to be truly absolute. King's gave to much power to the nobles and to the church letting them in some ways influence pollicies. They relayed heavily on his advisors and never did anything on their own. The fact that most countries were so large and communication so poor made it difficult for a king to know what was going on all the time. This made it difficult to know if policies were being carried out. Also because absolutist government's only lasted around a hundred years, made it difficult to make a structured method of government that would last. Religion also played a part on the absolutist government failing. Most monarchs were restricted by the rules of god, so cold never act totally on there own judgement, for fear of retribution in the afterlife. All these facts show that a totally absolute government would have been impossible at the time. Lee Bradshaw 12AML ...read more.