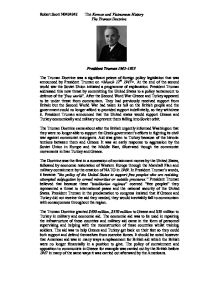 President Truman 1945-1953 The Truman Doctrine was a significant peiece of foreign policy legislation that was announced by President Truman on <March 12th 1947>. At the end of the second world war the Soviet Union initiated a programme of explanation. President Truman addressed this new threat by committing the United States to a policy tantamount to defence of the "free world". After the Second Word War Greece and Turkey appeared to be under threat from communism. They had previously received support from Britain but the Second World War had taken its toll on the British people and the government could no longer afford to provided support indefinitely, so they withdrew it. President Truman announced that the United states would support Greece and Turkey economically and military to prevent them falling into Soviet orbit. ...read more.

President Truman in the proclamation to congress insisted that if Greece and Turkey did not receive the aid they needed, they would inevitably fall to communism with consequences throughout the region. The Truman Doctrine granted $400 million, $350 million to Greece and $50 million to Turkey in military and economic aid. The economic aid was to be used in repairing the infrastructure of these countries and military aid came in the form of personnel supervising and helping with the reconstruction of these countries whilst training soldiers. The aid was to help Greece and Turkey get back on their feet so they could both support and defend themselves from coercive forces. It should be noted however that American aid was in many ways a replacement for British aid which the British were no longer financially in a position to give. ...read more.

The Truman Doctrine can be seen as a metaphor for emergency aid to keep a nation independent. Truman used disease imagery not only to communicate a sense of impending disaster in the spread of communism but also to create a rhetorical vision of containing it by extending a protective shield around non-communist countries throughout the world, his own Iron Curtain. It echoed the quarantine the aggressor policy of Franklin Roosevelt proposed in 1937. The medical metaphor extended beyond the immediate aims of the Truman Doctrine in that the imagery combined with fire and flood imagery evocative of disaster (Communism Spreading like wild fire, Waves of Communist Insurgents) provided the United States with an easy transition to direct military confrontation in later years with communist forces in Korea and Vietnam by presenting ideological differences in life or death terms. ?? ?? ?? ?? Robert Scott N0434343 The Korean and Vietnamese History The Truman Doctrine ...read more.