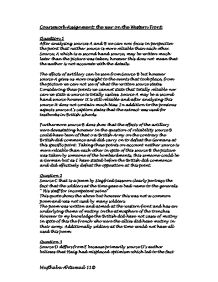 Coursework Assignment: the war on the Western Front. Question 1 After analysing sources A and B we can now focus in perspective the point that neither source is more reliable than each other. Source, A which is a second hand source, may be written much later than the picture was taken, however this does not mean that the author is not accurate with the details. The effects of artillery can be seen from Source B but however source A gives us more insight to the events that took place, from the picture we can not see of what the written source states. Considering these points we cannot state that totally reliable nor can we state a source is totally useless. Source A may be a second hand source however it is still reliable and after analysing this source it does not contain much bias. In addition to the previous aspects source A's caption states that the extract was used for textbooks in British schools. Furthermore source B does show that the effects of the artillery were devastating however in the question of reliability source B could have been of that o a British Army on the contrary the British did commence and did carry on to defeat the Germans at this specific point. Taking these points on account neither source is more reliable than each other in spite of this source B the picture was taken by someone of the bombardments, ...read more.

Another factor of the poster, which is accurate, is that the soldiers are in trenches. Trenches were dug all along the western front during the war. This was a war of attrition of wearing the opponents out however in spite of this the source is not as accurate as the soldiers are smiling. The conditions in the trenches were appalling, soldiers would have had to some limbs amputated due to the unhygienic conditions of the trenches but from the poster we can see the people smiling. The war especially on the western front was often regarded as a holiday. The image of going to war and killing a few soldiers and to be back home for Christmas was very common. Posters like this were used to support the war effort. This advertisement is propaganda and uses these holiday images to attract the British people to not only buy the cigarettes but to go and fight and then while there in there trenches and a cigarette. We can often imagine this and creates a very vivid image that it was so muddy in these trenches the only thing clean would be these white sticks in their mouths. Today we would call this source very ironic as I have stated before standing up in a trench was very dangerous. The soldiers are smiling, which was not a common site as feet and other parts were amputated. ...read more.

This quote reinforces the fact that even these brave young men that have come to fight or their country are screaming we can not imagine this but the source states them to scream if you would go any where near them. This overall clearly states that conditions were very poor in the trenches leading to a very slow and painful fight between the two sides. In my opinion I feel that considering all the aspects above we can now come to conclusion that the sources do help explain why the first World War lasting so long. In addition to the above people thought that the war had lasted so long maybe due to the fact that it was the First World War and there had been no other event such as it and no one really knew the timescale of such thing as I have stated above some if not all people thought that the war would be over before Christmas indoctrinated by many posters such as source F which increased the moral and spirits of those who were fighting. I think people thought it lasted long also due to the fact that they thought the war would be so short and the difference occurred were such a vast time gap people thought it had lasted long. Today we still do not have all the knowledge on how long a war should actually take, as there have only been 2 world wars. Hopefully it will be kept as this. Mujthaba Ahtamad 11(c) ...read more.