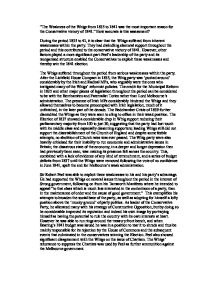 &quot;The Weakness of the Whigs from 1835 to 1841 was the most important reason for the Conservative victory of 1841.&quot; How accurate is this assessment?

"The Weakness of the Whigs from 1835 to 1841 was the most important reason for the Conservative victory of 1841." How accurate is this assessment? During the period 1835 to 41, it is clear that the Whigs suffered from inherent weaknesses within the party. They had dwindling electoral support throughout the period and this contributed to the conservative victory of 1841. However, other factors played a more significant part-Peel's leadership of the party and its reorganised structure enabled the Conservatives to exploit these weaknesses and thereby win the 1841 election. The Whigs suffered throughout the period from serious weaknesses within the party. After the Lichfield House Compact in 1835, the Whig party was 'pushed around' considerably by the Irish and Radical MPs, who arguably were the ones who instigated many of the Whigs' reformist policies. The credit for the Municipal Reform in 1835 and other major pieces of legislation throughout the period can be considered to be with the Benthamites and Paternalist Tories rather than Lord Melbourne's administration. ...read more.

Sir Robert Peel was able to exploit these weaknesses to his and his party's advantage. He had supported the Whigs on several issues throughout the period in the interest of Strong government, following on from his Tamworth Manifesto where he intended to appeal "to that class which is much less interested in the contentions of a party, than in the maintenance of order and the cause of good government." This exemplifies his attempts to broaden the social base of the party, as well as adopting for himself a lofty position above the 'mucky ground' of party politics. As leader of the Conservative Party, he alienated many with his strategy of Constructive Opposition, but by doing so he considerable improved its reputation and indeed his own image by portraying himself as having the potential to rule the country with its own interests at heart. However he was able to run rings around the treasury front bench, and when Bearing's 1841 budget was issued he was in a position to tear it to shreds and thus be ...read more.

Peel famously said that "the battle of the constitution must be fought in the registration courts", clearly acknowledging the importance of this activity in the Party's success. The appointment of a Chief Whip in 1837 brought a sense of discipline to the party, giving them as a whole a stronger position in the House of Commons. The party organisation evidently helped to take advantage of the slow drift of public opinion away from the Whigs: the election results of 1835 and 1837 showing the conservatives slowly chipping away at the huge Whig majority that had been established in 1832. Overall, the evidence suggests that the main reasons for the Conservative victory of 1841 were in fact Peel's leadership, and the newly reorganised, more efficient party structure. Some Historians suggest that the Whigs even had some strengths during the period, further discrediting the view that it was their weaknesses that lead to their electoral defeat. In general, the Conservatives showed considerable aptitude at taking advantage of the perception of "staleness and ineptitude" within the Whig party. ...read more.