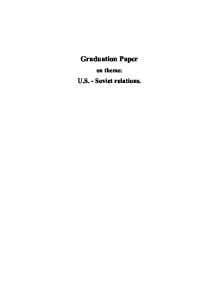 This graduation paper is about U.S. - Soviet relations in Cold War period. Our purpose is to find out the causes of this war, positions of the countries which took part in it. We also will discuss the main Cold War's events.

Graduation Paper on theme: U.S. - Soviet relations. Contents. Introduction. 3 Chapter 1: The Historical Background of Cold War. 5 1.1 The Historical Context. 5 1.2 Causes and Interpretations. 10 Chapter 2: The Cold War Chronology. 17 2.1 The War Years. 17 2.2 The Truman Doctrine. 25 2.3 The Marshall Plan. 34 Chapter 3: The Role of Cold War in American History and Diplomacy. 37 3.1 Declaration of the Cold War. 37 3.2 ?old War Issues. 40 Conclusion. 49 Glossary. 50 The reference list. 51 Introduction. This graduation paper is about U.S. - Soviet relations in Cold War period. Our purpose is to find out the causes of this war, positions of the countries which took part in it. We also will discuss the main Cold War's events. The Cold War was characterized by mutual distrust, suspicion and misunderstanding by both the United States and Soviet Union, and their allies. At times, these conditions increased the likelihood of the third world war. The United States accused the USSR of seeking to expand Communism throughout the world. The Soviets, meanwhile, charged the United States with practicing imperialism and with attempting to stop revolutionary activity in other countries. Each block's vision of the world contributed to East-West tension. The United States wanted a world of independent nations based on democratic principles. The Soviet Union, however, tried control areas it considered vital to its national interest, including much of Eastern Europe. Through the Cold War did not begin until the end of World War II, in 1945, U.S.-Soviet relations had been strained since 1917. In that year, a revolution in Russia established a Communist dictatorship there. During the 1920's and 1930's, the Soviets called for world revolution and the destruction of capitalism, the economic system of United States. The United States did not grant diplomatic recognition to the Soviet Union until 1933. In 1941, during World War II, Germany attacked the Soviet Union. ...read more.

conference in San Francisco both as a gesture to Roosevelt's memory and as a means of sizing up the new president. In a private conversation with former Ambassador to Moscow Joseph Davies, Molotov expressed his concern that "full information" about Russian-U.S. relations might have died with FDR and that "differences of interpretation and possible complications [might] arise which would not occur if Roosevelt lived." Himself worried that Truman might make "snap judgments," Davies urged Molotov to explain fully Soviet policies vis-a-vis Poland and Eastern Europe in order to avoid future conflict. Truman implemented the same no-nonsense approach when it came to decisions about the atomic bomb. Astonishingly, it was not until the day after Truman's meeting with Molotov that he was first briefed about the bomb. By that time, $2 billion had already been spent on what Stimson called "the most terrible weapon ever known in human history." Immediately, Truman grasped the significance of the information. "I can't tell you what this is," he told his secretary, "but if it works, and pray God it does, it will save many American lives." Here was a weapon that might not only bring the war to a swift conclusion, but also provide a critical lever of influence in all postwar relations. As James Byrnes told the president, the bomb would "put us in a position to dictate our own terms at the end of the war." In the years subsequent to Hiroshima and Nagasaki, historians have debated the wisdom of America's being the first nation to use such a horrible weapon of destruction and have questioned the motivation leading up to that decision. Those who defend the action point to ferocious Japanese resistance at Okinawa and Iwo Jima, and the likelihood of even greater loss of life if an invasion of Japan became necessary. Support for such a position comes even from some Japanese. "If the military had its way," one military expert in Japan has said, "we would have fought until all 80 million Japanese were dead. ...read more.

Iron Curtain - was the popular phrase, which Churchill made to refer to Soviet barriers against the West. Behind these barriers, the USSR steadily expanded its power. Marshall Plan - encouraged European nations to work together for economic recovery after World War II (1939-1945) / In June 1947, the United States agreed to administer aid to Europe in the countries would meet to decide what they needed/ The official name of the plane was the European Recovery Program. It is called the Marshall Plane because Secretary of the State George C. Marshall first suggested it. Potsdam Conference -was the last meeting among the Leaders of Great Britain, the Soviet Union and the United States, during World War II. The conference was held at Potsdam, Germany, near Berlin. It opened in July 17, 1945, about two months after Germany's defeat in the war. Present at the opening were U.S. President Harry S. Truman, British Prime Minister Winston Churchill, and the Soviet Premier Josef Stalin. Yalta Conference - was one of the most important meetings of key Allied Leaders during World War II. These Leaders were President Franklin D. Roosevelt of the United States, Prime Minister Winston Churchill of Great Britain, and Premier Josef Stalin of the Soviet Union. Their countries became known as the "Big Three". The conference took place at Yalta, a famous Black Sea resort in the Crimea, from Feb. 4 to 11, 1945. Through the years decisions made there regarding divisions in Europe have stirred bitter debates. The reference list. 1. William H. Chafe "The Unfinished Journey: America since World War II" New York Oxford, Oxford University press, 1991. 2. David Caute "The Great Fear", 1978 3. Michael Belknap "Cold War Political Justice", 1977 4. Allen D. Harper "The politics of Loyalty", 1959 5. Robert Griffin "The politics of Fear", 1970 6. James Wechler "The Age Suspicion" 1980 7. Alistair Cooke "A Generation on Trial", 1950 8. An outline of American History 9. World Book 10. Henry Borovik "Cold War", 1997 ...read more.