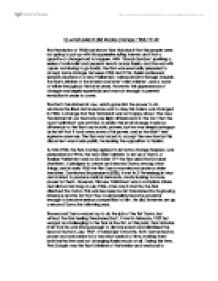 To what extent did Russia change 1905-1914? The Revolution of 1905 had shown Tsar Nicholas II that his people were not going to put up with his oppressive ruling forever, and that a quantity of change had to happen. With "Bloody Sunday" sparking a series of nationalist and peasant revolts across Russia, and the war with Japan continuing to go badly, the Tsar was eventually prepared to accept some change. Between 1905 and 1914, Russia underwent several creations of a new Parliament, various reforms through Stolypin, the Tsar's Minister of the Interior and later 'chief minister', and a wave of strikes throughout the latter years. However, this appearance of change was largely superficial and was not enough to prevent revolution in years to come. The Tsar's Fundamental Law, which gave him the power to do whatever he liked and everyone was to obey his orders, was changed in 1905; a change that Tsar Nicholas II was not happy about. The New Fundamental Law had only one slight difference in it, the fact that the word 'unlimited' was omitted. ...read more.

During this time, Petr Stolypin was the Tsar's Minister of the Interior and was loyal to Tsarism and a member of the nobility. He wanted to give peasants land and money so that they would become subsistence farmers, thus strengthening Tsarism, and hoped that the Duma would introduce reforms dictating this. However, the Tsar was not in support of Stolypin's aims, as he thought that they would weaken the nobility. In the time running up to the elections for the new Duma in 1907, Stolypin was very harsh towards peasant revolutionary groups, executing 683 people by April 1907. This shows no change to Russia, as Stolypin's actions followed the continually repressive nature of the Tsarist regime. In spite of this, when Stolypin created a third Duma, reforms began to take place that were planned to change the traditional image of Russia. Stolypin's overriding aim was to save Tsarism and strengthen it, and he realised that a Duma was needed but one that would work with him and the Tsarist regime. ...read more.

Russification continued under Stolypin, now with particular emphasis on Poland and Ukraine. There was a large rise the number of anti-Jewish pogroms, and when the Zemstva was introduced in Poland, it was dominated by Russians. This demonstrates the lack of change that happened in Russia, and highlights the desire for domination of Russia's sphere of influence. The third Duma can arguably be called successful in their aims to introduce change. By 1914, literacy levels had risen to 40% thanks to educational reforms, the Duma had taken control of 62% of Soviet expenditure by 1912, and large sums of money were spent on the modernisation of the army by the Duma. However, Stolypin's reforms alienated the Rightists and disappointed the liberals. When he was assassinated in 1911 by peasant revolutionaries, he did not know that the Tsar had been planning to sack him anyway. Overall, the little change that did occur in Russia between 1905 and 1914 was only effective for a short while. The immediate failure of the first two Dumas proved the Tsar's insecurity and Stolypin's reforms made him many enemies. The violent reaction to the Lena Goldfields strike in particular illustrates the continuing repressive way of the Tsarist regime, and by 1914, violent revolution was inevitable. ...read more.