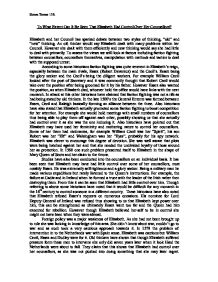 To What Extent Can It Be Seen That Elizabeth Had Control Over Her Counsellors?

To What Extent Can It Be Seen That Elizabeth Had Control Over Her Counsellors? Elizabeth and her Council has sparked debate between two styles of thinking, "old" and "new" thinking. An old thinker would say Elizabeth dealt with many problems within her Council. However she dealt with them efficiently and new thinking would say she had little to deal with primarily. To assess the views we will look at factors including faction fighting between counsellors, counsellors themselves, manipulation with methods and tactics to deal with the supposed unrest. According to some historians faction fighting was quite reverent in Elizabeth's reign, especially between the main rivals, Essex (Robert Devereux) and the Cecil's. Essex being the glory seeker and the Cecil's being the diligent workers. For example William Cecil looked after the post of Secretary and it was commonly thought that Robert Cecil would take over the position after being groomed for it by his father. However Essex also wanted the position, as when Elizabeth died, whoever held the office would have links with the next monarch. In attack at this other historians have claimed that faction fighting was not a rife as had being stated by old thinkers. ...read more.

However when Dudley went to Netherlands some historians have pointed out that he went against the Queens wishes showing her lack of control over him but there is an obvious counter argument to this. Elizabeth was in England, Dudley was in the Netherlands, and it would have been impossible to keep control over him for any monarch. Therefore though this may have been a particularly weak area for Elizabeth to assert control, it is probably a weakness that any monarch would have, not just herself. Manipulation of Elizabeth was a common practice with counsellors. Some historians have claimed that Elizabeth was in constant manipulation by them, even by loyal servants such as William Cecil were to have manipulated her. For example it was found that he often sent letters to foreign ambassadors instructing them on what to say to Elizabeth in order to further his political wishes. So was Neale's "loyal servant" correct? To back this up it can be seen that manipulation was typical of 16th century politics. For example the Duke of Buckingham hugely manipulated James I. It was not simply Elizabeth who suffered manipulation by her counsellors, some historians have just been too critical of Elizabeth because she was a woman. ...read more.

It has been pointed out that the Cecil's may have controlled Elizabeth by using a more gradual and cautious approach. William Cecil never took all the promotions that Elizabeth offered him, thus building trust, and gaining influence until eventually they were the most powerful family/group in the council. However old thinkers have again pointed out that though Elizabeth may have deeply trusted this group she never continuously went along with their advice. For example the issue with Mary Queen of Scots. William Cecil was in favour of a quick execution however the 19 years wait shows us that perhaps Elizabeth ultimately had control over him. In conclusion it can be seen that Elizabeth held powerful control over her counsellors though sometimes she had faults such as with foreign policy. But ultimately she had things in control. She employed various tactics to do so such as servant intrigue and often held the "upper hand" on most power/political games within the council for example the demise of both men who attempted to overthrow her, Essex and Dudley. Though some new thinkers have claimed that some of the problems were not as rife as old thinkers have made them out to be she still had a good control over them at length. As evidenced by her exceptionally long reign. Simon Turner 13R ...read more.