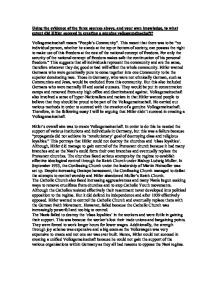 To what extent did Hitler succeed in creating a genuine volksgemeinschaft?

Using the evidence of the three sources above, and your own knowledge, to what extent did Hitler succeed in creating a genuine volksgemeinschaft? Volksgemeinschaft means "People's Community". This meant that there was to be "no individual person, whether he stands at the top or bottom of society, can possess the right to make use of this freedom at the cost of the national concept of freedom. For only the security of the national concept of freedom makes safe the continuation of his personal freedom." This suggests that all individuals represent the community and are the same, therefore whatever they do; good or bad will affect the whole community. Hitler wanted Germans who were genetically pure to come together into one Community to be the superior dominating race. Those in Germany, who were not ethnically German, such as Communists and Jews, would be excluded from this community. But this also included Germans who were mentally ill and social outcasts. ...read more.

But it did defend its independence and after 1939 effectively opposed. Hitler wanted to control the Catholic Church and eventually replace them with the German Faith Movement. However, failed because the Catholic Church was increasingly powerful and too big to control. The Nazis failed to destroy the 'class loyalties' in the workers and were futile in gaining their support. This was because the worker's lost their trade unions and bargaining points. They were forced to work longer hours for lower wages. Additionally, the strength through joy scheme was expensive and a big scam as the Volkswagen was very expensive to create and not one car was ever built. Hence, Hitler could not succeed in creating a unified Volksgemeinschaft because he could not gain the support of the various organisations within Germany as they all had reasons to oppose the Nazi regime. On the other hand, some may argue that Hitler did succeed in creating a genuine Volksgemeinschaft because the Hitler Youth were enthusiastic about life under the Nazi regime because it "provided wide-scale opportunities for advancement." ...read more.