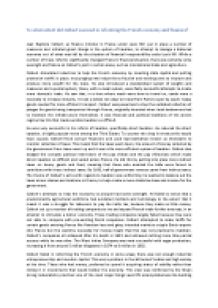 To what extent did Colbert succeed in reforming the French economy and finances?

Transfer-Encoding: chunked ﻿To what extent did Colbert succeed in reforming the French economy and finances? Jean Baptiste Colbert, as finance minister in France under Louis XIV, put in place a number of measures and initiated great change in the system of taxation, to attempt to salvage a balanced economy out of what was left by the situation of financial irresponsibility under Louis XIII. While a number of these reforms significantly changed France?s financial situation, there was certainly some oversight and failure on Colbert?s part in certain areas, such as international trade and agriculture. Colbert stimulated industries to help the French economy by investing state capital and putting protective tariffs in place, encouraging new industries to flourish and existing ones to improve and produce more wealth for the state. He also introduced a standardised system of weights and measures and a postal system; these, with a canal system, were fairly successful attempts to create more domestic trade. He saw that, in a time where roads were slow to travel on, canals were a necessity to increase industry. ...read more.

By 1683, half of government revenue came from indirect taxes. The theme of Colbert?s aims with regards to taxation was uniformity; he wanted to balance out the taxes across classes and locations in France, to help create a more stable tax base and income for the government. Colbert?s attempts to help the economy to prosper had some oversight. He failed to notice that a predominantly agricultural workforce had outdated methods and technology to the extent that it meant it was a struggle for labourers to pay the taille tax, because they made so little money. Colbert set up a number of trading companies to try and expand French trade further overseas, in an attempt to stimulate a better economy. These trading companies largely failed because they were not able to compete with pre-existing Dutch companies. Colbert attempted to make tariffs for certain goods entering France like Venetian lace and glass, intended mainly to cripple Dutch exports into France but the wartime necessity for money meant that this was not practical to maintain. ...read more.

His companies and industrial projects were all left severely underfunded. Colbert had great success in reforming the French economy and finances; his reforms were well-suited and helped to deal with the situation they faced: his reforms of direct and indirect taxation pleased everyone (aside from corrupt tax collectors) by reducing the amounts taxed and increasing the proportion of it which became government income by streamlining the process of tax collection, with intendants inspecting it. The use of the indirect tax to skip the geographical restrictions of the direct taxes was clever and helped to balance the load of taxation on all of France?s population slightly more evenly. Improvements in infrastructure were significant to allow quicker trade as well. However, his companies and industrial ventures did not do nearly as well as they should have done based on the focus he set on them, remaining underfunded with few partially successful. He did little to improve the agricultural inefficiency that plagued France?s labourer class. Colbert reformed certain areas of France?s finance very well but he seemed to miss certain key areas that could have been improved, meaning his economic reform was not fully successful. ...read more.