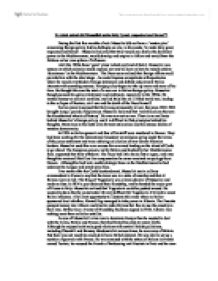 To what extent did Mussolini make Italy 'great, respected and feared'?

To what extent did Mussolini make Italy 'great, respected and feared'? During the first few months of rule Mussolini did not have a 'master plan' concerning foreign policy, but he did begin an aim, in his words, 'to make Italy great, respected and feared'. Mussolini believed that Italy would one day be the dominant power in the Mediterranean, would develop and empire in Africa and would have the Balkans as her own sphere of influence. Until the 1930s these 'great' plans lacked any kind of detail. Mussolini was unsure on which colonies would expand, nor was he clear on how he would achieve 'dominance' in the Mediterranean. The Duce soon realised that foreign affairs could provide him with the ideal stage - he could impress compatriots with spectacles where he would overshadow foreign statesmen and defend and promote Italian interests with unending success. Foreign policy began to take up more and more of his time. He thought this was the start of a new era in Italian foreign policy. Mussolini though pursued his goals relentlessly and recklessly, especially in the 1930s. He wasted money on colonial conflicts, and led Italy into an ill-fated world war, leading to the collapse of fascism, civil war and the death of the Duce himself. ...read more.

His hatred of France even led him to side with her greatest enemy; Germany. Mussolini realised in the 1920s that a strong, resurgent Germany, seeking revision of Versailles, would be able to frighten Britain and France and make them more susceptible to Italian demands. He believed that nationalists were to be they key groups of the future, and so he strived to support the Nazis. The Nazis didn't impress him in their infancy, labelling them 'buffoons'. He saw no true problems with them and helped them re-arm. Mussolini was worried when Austrian Nazis assassinated Dollfus, the Austrian Chancellor. Realising that Anschluss would threaten Italian domination of the Tyrol and Alps, he threatened to invade Austria if Hitler decided to move in. Hitler was dependant on Mussolini to neutralise Britain and France, so he backed down. Mussolini believed that there was no longer any problem and continued with the policy of destroying the Social democrats in Austria, the only party capable of preventing Nazis from gaining power. Mussolini believed that Italian colonies should be developed and expanded, not for commercial gain but because the possession of an increasing empire would strengthen Italy's claim to be a great power. The idea of possessing colonies was in Italian's blood after all. ...read more.

But by the end of the year the Fascist armies had been pushed back into Libya and Albania respectively. The navy did no better, losing half its fleet to a British air attack on the port of Taranto in November. In 1941 his ill equipped attack on the British in Egypt foundered. A counter-offensive took 100,000 Italians prisoner. In February, the British captured Italian Somaliland, thus starting the break up of Italy's empire. In April Addis fell. In June Mussolini sent his troops to invade Russia with Germany, they suffered cruelly at the front. In 1942 the British cracked the Axis front in Egypt. By 1943 the Axis forces were overwhelmed in Tunisia. 20,000 were lost or injured. The Allies now were free to cross to Sicily and invade the Italian mainland. He blamed cowardice. Mussolini's foreign policy goals were far too ambitious. It is hard to imagine how he thought he could dominate Europe, hold numerous African colonies and have political control over the Balkans. To have gained even one of these aims Italy would have required more planning and a more modernised and efficient armed force, and importantly an economy capable of providing the funds for a war. Italy had established political control over Albania, annexed Ethiopia and played a part in international conferences but this was far from being 'great, respected and feared.' ...read more.