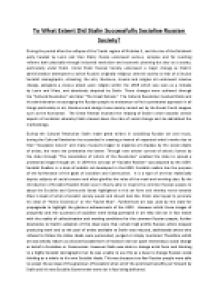 To What Extent Did Stalin Successfully Socialise Russian Society?

﻿To What Extent Did Stalin Successfully Socialise Russian Society? During the period after the collapse of the Tsarist regime of Nicholas II, and the rise of the Bolshevik party headed by Lenin and then Stalin, Russia underwent serious, complex and far reaching reforms both physically through industrial revolution and economic planning but also as a society, particularly under Stalin. Under Stalin Russian Society underwent a major change as Stalin?s administration attempted to switch Russia?s originally religious centred society to that of a Secular Socialist demographic, schooling, the arts, literature, cinema and religion all underwent massive change, alongside a viscous attack upon religion within the USSR which was seen as a mistake by Lenin and Marx, and absolutely despised by Stalin. These changes were achieved through the ?Cultural Revolution? and later ?The Great Retreat.? The Cultural Revolution involved Stalin and his administration encouraging the Russian people to endeavour to find a proletariat approach in all things particularly in art, literature and design it was mainly carried out by the Soviet Youth Leagues such as the Komsomol. The Great Retreat involved the relaxing of Stalin?s drive towards certain aspects of socialism whereby Stalin slowed down the rate of social change and de-radicalised the methodology. During the Cultural Revolution Stalin made great strides in socialising Russian art and music, during the Cultural Revolution he succeeded in creating a hatred of respected artist?s works due to their ?bourgeois nature? and many museums began to organise art displays by the social origins of artists, the more the proletariat the better. ...read more.

The study of Marxism-Leninism remained in the curriculum, technological education reined paramount, although accompanied by the state's overwhelming urge to indoctrinate the students into the benefits of Socialism / Communism. Under Stalin's the educational system was marked by an emphasis on engineering and related topics and a concerted drive to eliminate illiteracy. By doing this Russian society was demonstrating further elements of changes towards a more Socialist/ Communist society with equal opportunity for all regardless of gender or background as well as producing a generation of almost fanatically Socialist people ready to advance the cause of Socialist and Communist progression and more importantly the goals of the state. Under Stalin the Russian youth were given purpose, they were used to carry out socially useful tasks such as spreading anti religious propaganda. This was usually achieved through the encouragement of children to join Communist Youth Leagues and in particular the ?Komsomol? (All-Union Leninist Young Communist League), the ?Pioneers? (All-Union Lenin Pioneer Organization) and the ?Little Octobrists?. The ideology of the Komsomol was to encourage young Russians to live their lives in line with the Communist Party doctorine. Members were aged between 14 years and 28 years were given a variety of tasks to undertake such as imposing labour discipline, routing out bourgeois intellectuals and reporting on the mood of the general Russian public. The Pioneers and The Little Octobrists were organisations for children younger than 14 years. ...read more.

Stalin was quoted to saying it was a fundamental instinctive need of the Russian people to need a subject of worship and leadership and he intended to deliver this, therefore Stalin is stating that Russian society was not ready for the transition to true socialism/communism and. These features were all classic of a feudalistic society, with the proletariat lead by a small contingent of elite people lead by one supreme autocrat. Because of this Stalin had failed to socialise a key part of Russia to reflect the aims of the socialist utopia ideal set out by himself and earlier Lenin, with Russia still stuck in a backwards style of leadership, furthermore this cult of personality, was in direct conflict with socialism due to it glorifying one man?s achievements and producing almost a new religion again directly conflicting with Marxism and Leninism which states that socialist society should be secular. In conclusion Stalin ultimately had made considerable steps towards socialising Russian society, particularly in the youth and education and to an extent the arts, however he had also set aspects of society back, Russia was still run in a structure more imperialist/ feudalistic in its nature, with both a cult personality bordering on deity worship and a strong religious population despite the best efforts of the state to eliminate religion. These things therefore show that Russia had progressed marginally towards a more socialist viewpoint, but still had a long way to go. Ultimately then Stalin was somewhat successful at socialising Russian society. ...read more.