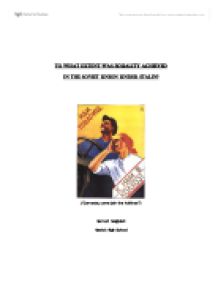 To what extent was equality achieved under Stalin?

To what extent was equality achieved in the Soviet Union under Stalin? ("Comrade, come join the Kolkhoz!") Hannah Dalgleish Hawick High School Contents Introduction p 3 National Minorities and Equality p 5 Rural Equality and Collectivisation p 7 Industrialisation and the Equality of the Proletariat p 10 The Purges: Stalin's equaliser p 14 Equality: Gender and Personal Expression p 17 Conclusion p 20 Bibliography p 22 Total Word Count: 3999 Introduction For a truly equal state to exist, the "utopian dream of community through equality, sharing, and fairness in income and privilege"1 would have to be set in place. The nation's population would have to be equal regardless of ethnicity, background, gender, or religion. Society would be classless, and everyone would have an equal opportunity to education and work. Karl Marx believed that equality could be achieved through a series of revolutions in the Western capitalist states, essentially creating a great Communist nation.2 He would have never expected that Russia would attempt to be the first country to adopt communism - largely due to its relatively backward industrial position in his lifetime. After the Bolshevik Revolution of October 1917, Lenin laid the foundations that would lead Russia towards communism. However, under Stalin, the hope that Russia would become the first Communist country would grow evermore distant. Instead, a dictatorship within a bureaucratic state was created, completely opposing the idea of an egalitarian society. In the words of Trotsky, "the equality of the rights of workers and peasants means, in reality, an equal lack of rights before the bureaucracy."3 This clearly portrays the divide between those in control - the government and their managers - with the proletariat. The extent to which equality was accomplished in the Soviet Union under Stalin varies. The national minorities, who had experienced liberalism for the first time under Lenin, saw it curtailed by the new polices instigated by Stalin. ...read more.

As Soviet Russia slipped into the rule of Stalin, the standard of living for the average worker fell which "convinced many of the older and middle generations that this newly developed industrial wealth was being exploited."31 Also, "harsh discipline and arbitrary managerial authority"32 was instilled. Between 1928 and 1929, when the 'Great Leap Forward'33 had begun, the trade unions had lost any autonomy that they had previously. Rostow demonstrates how "Party ideology has ceased to emphasise proletarian superiority"34 where a sharp loss in political privileges and social status has been eminent. Lenin had insisted on the 'Party maximum'35 to prevent this inequality from happening. It is believed that if Lenin had remained in power, he would have managed industrialisation more humanely.36 Previously, no party member had received a higher salary than a skilled worker, but Stalin had ended this in 1931 when he attacked 'petty-bourgeois egalitarianism'37. He demanded substantial increases on wage differentials, and increased the pay of managers, engineers and officials. The new intelligentsia and technicians formed a new upper class where "inequalities became not only very large but were implanted in the official ideology by Stalin personally."38 Stalin had no problem in the use of patronage and privilege, strongly believing that it was an essential part of the 'power-mechanism'.39 He justified this with incentives; human skills were in short supply so rewards were needed for those who excelled. Corruption soon became manifest. Managers were driven in chauffeured cars, with dachas to go to in the countryside, larger flats and access to meat. When one family had 150 roubles a month to live on and another had 3000,40 this was clearly more than privilege, it was a new Soviet bourgeoisie and "was the most visible signs of the existence of two groups in society".41 The difference between the pay of those at the top and those at the bottom, in the late 1930s, was so great that they were larger than those in the USA.42 This epitomises inequality where the "Soviet society had ...read more.

However, as Stalin's reign progressed and the Purges were implemented, great oppression followed. This is illustrated by the relief and overwhelming joy that the national minorities had felt when the Soviet Union had been invaded by Germany in the Second World War. Moreover, the peasants suffered more terror than they had ever experienced; collectivisation split up communities where kulaks and thousands of unwilling peasants were killed or sent to Gulags. Furthermore, inequalities were at hand through exploitation; grain was sold much higher than the rate that it was bought from the peasants. Due to industrialisation, it is clear to see the inequalities manifested by the great privileges given to the managers and technicians, which created a great divide between the unskilled workers and the skilled. In addition, the Purges instilled fear into the industrial workers, as well as encompassing the entire Soviet society from the government itself to artists or religious persons. Up to ten million were arrested and executed; an amount so vast that whole families and communities were destroyed, creating a chaotic and unstable lifestyle, undeniably with the loss of equal opportunities. Evidence indicates that women enjoyed equality under Stalin more than under the rule of the Tsars - while Lenin's reforms were radical, there were unintended negative consequences for women. Communist restrictions upon religion demonstrate further inequalities in expression. All areas of society experienced suffering and torment under Stalin - even those at the apex of the Soviet hierarchy. Theoretically, women lived with more legal protection under Stalin compared to any other previous leader of Russia, but this cannot be celebrated given the overall extent of oppression and suppression. The whole of society under Stalin suffered more than they had under the Tsars, thus there was a type of negative equality in hardship and fear. Soviet society was oppressed by collectivisation, industrialisation and ultimately, the Purges. The extent to which positive equality was achieved under Stalin in the Soviet Union was minimal, limited by Stalin's strategies, fear-mongering, and the threat of war. In the words of Marx, "Political power... is merely the organised power of one class for oppressing another. ...read more.