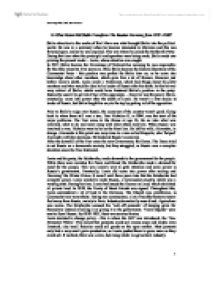 To What Extent Did Stalin Transform The Russian Economy from 1929-1940?

To What Extent Did Stalin Transform The Russian Economy from 1929-1940? Stalin attraction to the works of Karl Marx was what brought Stalin into the political world. He was in a seminary when he became interested in Marxism and this was frowned upon, and so he was expelled. This was where he joined the Bolshevik Party. During the time when the party split and speeches were being made, Stalin made one praising the present leader - Lenin, whose attention was caught. In 1917, Stalin became the Commissar of Nationalities meaning he was responsible for the ethic minority. Five years on, 1922, Stalin became the General Secretary of the Communist Party - this position was perfect for Stalin later on, as he came into knowledge about other members, which gave him a lot of favours. However just before Lenin's death, Lenin wrote a Testament, which had things about his party members and who would be ideal to be leader of Russia after his death. In this he was very critical of Stalin, which could have hindered Stalin's position in the party. Instead he used it to get rid of two of his opponents - Zinoviev and Kamenev. ...read more.

However this was only to get supporters for the battle for the top spot. Three years later, Stalin went against this policy and promoted rapid industrialisation. To start of this industry, Stalin started with the rural side of Russia. He started 'Collectivisation', which was where Stalin wanted to 'collect' all peasants' farms and make one big farm, which would work together to make more crops and grain. Stalin used 'kulaks' which is the term he used to describe the 'well-off' peasants. He used these 'kulaks' as propaganda for industrialisation, stating that it was there fault that there is famine and that the peasants have been reduced to this. A lot of peasants did not accept this and mayhem was among the rural side of Russia. People were sent to 'camps'. Many peasants burnt their crops and killed their livestock to stop the government from taking away what they owned. In the 1930's, there were 1/4 million people in 'collectivisation brigades'. The result of collectivisation was a complete disaster. Stalin did halt the process for a while because of the chaos, but then restarted it. He blamed the madness on the officials sent, stating they were "Dizzy with Success". ...read more.

Scrapping the NEP and bringing in Collectivisation did not agree with the people - it terms of its impact to the economy, it didn't help much at first, as people were burning crops and livestock and those unwilling to help were sent to labour camps - reducing the number of farm workers. Although after the chaos died down and famine eased in 1939, there was still not enough to feed the country and about 10-15 million peasants. Industrialisation furthered the economy. With the rapid increase in coal, etc, thanks to Stakhanovism, the economy ascended further. However, targets were made to look like they were achieved, but in fact they weren't. Of course, Stalin and the government were none the wiser. So in conclusion the extent Stalin transformed the Russian economy from 1929 to 1940, was a lot. Lenin changed it from the shambles it was made by from the Duma and Tsar, and Stalin improved the economy by introducing the 'Five Year Plan' even though targets were lied about, Russia's industry did make progress - the industry was more advance then it was 20 years or so ago. Industry plays a big part in getting money into the economy. Without Stalin putting his ideas into action, Russia could still be stuck in famine and probably only just beginning their industry progress. Amandeep Gill, 12IT, Mrs Yeomans 1 ...read more.