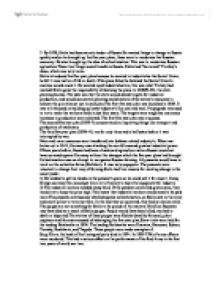 By 1929, Stalin had become sole leader of Russia.He wanted things to change in Russia quickly and so he brought up the five year plans, these were to modernise the Russian economy. He also brought up the idea of collectivisation.

3 By 1929, Stalin had become sole leader of Russia.He wanted things to change in Russia quickly and so he brought up the five year plans, these were to modernise the Russian economy. He also brought up the idea of collectivisation. This was to modernise Russian agriculture.These two things would transform Russia. Stalin had "borrowed" Trotsky's ideas, which was very ironic. Stalin introduced the five year plans because he wanted to industrialise the Soviet Union, he felt it was matter of life or death. If his plans failed he believed the Soviet Union's enemies would crush it. He wanted rapid industrialisation; this was what Trotsky had wanted! Stalin gave the responsibility of devising the plans to GOSPLAN, the state planning bureau. The idea was that the state would decide targets for industrial production, and would use central planning and direction of the nation's resources to achieve the priorities set out in each plan.The first five year plan was launched in 1928. It was to b focused on building up heavy industry's like coal and steel. Propaganda was used to try to make the workers finish in just four years. The targets were tough but enormous increases in production were achieved. ...read more.

This had a serious effect on the performance of the Red Army in the first two years of world war two. Religion played a big part in Russian lives. The Orthodox Church had dominated the lives of most Russians.Stalin outlawed the Church, buildings were destroyed, priests were publicly humiliated and forced to confess that they had been lying and other religions (such as Islam's and Buddhist) were persecuted too. There was a greater impact in the countryside.Many people would turn to God in tough times, but Stalin took God away, it was as if Stalin was God, because he had the power to take him away. Education was something Stalin was keen on. He wanted his country to be able to read!Stalin introduced free compulsory education for everybody. Literacy improved massively. In 1900 25% of people could read, In 1925 40% of people could read, In 1940 75% of people could read.This was a big increase and Stalin had done well to get 75% of people reading by 1940. Some Russians regard Stalin as the greatest ever leader, and some don't. He had done some good things as leader of Russia, and some bad things. He introduced free education, won the war against Germany, industrialisation in just 10 years and he was very popular. ...read more.

In 1940, Stalin also improved living and working conditions in Russia, as there were more doctors per head, decreasing the chance of sickness, disease, and improved sanitation among the Russian people. Lenin did not do anything such as free and compulsory schooling and work-based training to improve the economy. However, Stalin was very harsh on work, and there were downsides to the successes of Stalin. Lateness was usually punished by sacking, which usually meant losing one's home. Stalin also created a famine in the process of collectivisation as millions of people died by selling grain abroad while not having enough food to feed themselves- many starved while watching bitterly as groups working for Stalin collected food produced by the area. For example, in only one area, the Causcaus region of Russia, from 1933-38, a staggering 5 million able workers vital to the economy of Russia, died due to starvation. Lenin did not cause a famine with so many deaths as Stalin's one. There was unrest among starving peasants- rebelling against Stalin's policy, which slowed down production. Stalin had achieved a lot by improving the economy of Russia greatly and improving the lives of many of Russia's people, using good and bad ways to achieve it. Stalin was admired by the Russian people and he, his style and methods of government were popular. ...read more.