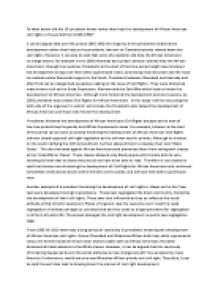 To what extent did the US president hinder rather than help the development of African American civil rights in the period from 1865-1992?

Grover Cleveland and Woodrow Wilson both help white supremacist views, the former boasted he had never shared a table with an African American; the latter dismissed all black advisors to the White House. However, it can be argued that this continuity of hindering happened due to the social attitudes as new change wouldn?t be accepted by many America. Furthermore, world war one was Woodrow Wilson priority not civil right. Therefore, it can be said the ww1 also lead to slowing down the process of civil right development. Those presidents who were passive, I believe hindered the development of Civil Rights as they were not part of the solution. I believe they were indeed part of the problem. Theodore Roosevelt through to Hoover achieved very little as they were unsympathetic, useless or preoccupied. These presidents stood by as African Americans were segregated, discriminated and oppressed. For example, Theodore Roosevelt was criticised by white supremacist for holding official meeting with booker. Therefore it can be said that he was scared to take any favour for African Americans. Furthermore, president like Woodrow Wilson held racist view therefore; he was unlikely to help civil right development. ...read more.

Also, Kennedy and Lyndon were crucial for helping African Americans gain civil rights. Kennedy efforts to attain civil rights can be argued was a means to gain votes. It can also be put forward that Kennedy was somewhat forced due to media coverage of protests such as those in Birmingham and the police brutality. Regardless, his actions and those of Lyndon carried forward after his untimely death helped develop Civil Right. The Civil Rights Act of 1964 and the Voting Rights Act of 1965 granted Civil Rights for African Americans. It can be said that these president were only able to help to due to change in the social attitudes for example, at the start of the period emancipation proclamation introduced by Lincoln were rejected due to white Supremacist views. Whereas, the acts such as voting were accepted in 1965, suggesting that change in social attitudes lead to civil right act. In conclusion, the action of those presidents who did help was significant, without which no progress would have been made. The presidents who hindered facilitated and sustained institutional racism, those who were passive did nothing. Furthermore, it can be argued that Presidents helped only when social attitudes had changed enough for the majority of Americans to want civil rights for African Americans. Presidents reflected attitudes of the time. ...read more.

This uses many useful examples to discuss the question and retains its focus but the structure is too simplistic and so it can be difficult to follow the thread of the essay. Proof reading would have been useful.