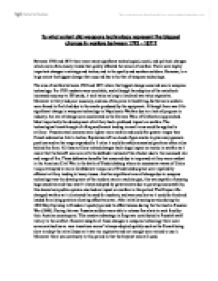 To what extent did weapons technology represent the biggest change in warfare in the period 1792-1945?

To what extent did weapons technology represent the biggest change in warfare between 1792 - 1871? Between 1792 and 1871 there were many significant technological, social, and political changes which were often closely linked that greatly affected the nature of warfare. There were highly important changes in strategy and tactics, and in the quality and numbers soldiers. However, to a large extent the biggest change that occurred has to be that of weapons technology. The area of warfare between 1792 and 1871 where the biggest change occurred was in weapons technology. Pre 1792 muskets were unreliable, and although the adoption of the matchlock increased accuracy to 200 yards, it took twice as long to load and was twice expensive. Moreover artillery had poor accuracy, and was often prone to backfiring, furthermore soldiers were forced to fire blind due to the smoke produced by the equipment. Although there was little significant change in weapons technology in Napoleonic Warfare due to a lack of progress in industry, the rate of change soon accelerated as the German Wars of Unification approached. Most importantly the development of artillery had a profound impact on warfare. The technological breakthrough of rifling and breech loading in small arms could be applied to artillery. Prussian steel cannons were lighter more mobile and could fire greater ranges than French adversaries link to tactics. ...read more.

Pre 1792 officers paid for ranks and so authoritative positions in the army were made up of the nobility or wealthy aristocrats whilst lower ranks were made up of criminals and drop outs. This socially structured nature of the army changed largely during Napoleonic Warfare where meritocracy was enforced. This was possible largely the increasing literacy rates among the middle classes. Meritocracy within the army meant big changes in warfare because it meant those who were best suited to the role got the job, and thus meant the standards of generalship were higher. Particularly in the German Wars of Unification this allowed power to be delegated to flexible generals on the battlefield, who could then make decisions based on what was in front of them, rather than on a rigid strategic plan. This flexibility within armies, particularly the Prussian one, reaped dividends in battles such as Konnigratz where both the Prussians and Austrians armies on field leadership had to think on their feet as the armies stumbled into each other. The higher quality of the on field Prussian soldiers prevailed in this battle through tactics such as envelopment whilst the Austrians dithered. During the Napoleonic wars there was also a huge change in the numbers of soldiers. One of the key reasons for such a fast rate of change in this area was the French Levee En Masse which ...read more.

The rate of change in strategy and tactics stayed at a steady rate into the German Wars of Unification as improved communications and the development of railways within Europe meant troops could be transported far quicker than when having to march. Moreover another important change in this period was the development of blockading strategies which moved the nature of warfare from being limited towards total. A clear example of this is in the American Civil War where the Union Navy maintained a blockade on the Atlantic and Gulf Coast of the Confederate States of America designed to prevent the passage of trade goods, supplies, and arms to and from the Confederacy in an attempt to starve their opponents. Despite all these changes in strategy and tactics there were some consistencies in this period such as the sustained use of infantry and cavalry in battles as well as the continuation of bayonet charges to weaken the enemy. Overall the area where the most changed occurred in the period from 1789-1871 was in fact in weapons technology. However there were also significant changes in quality and organisation of soldiers as well as strategy and tactics which should not be undermined when assessing the evolving nature of warfare in this period of history. Despite all these changes in warfare, there were still some consistencies which show that none of these areas of warfare changed completely. ...read more.