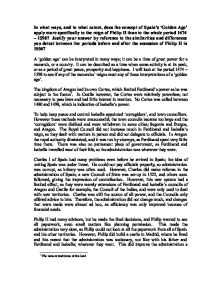 To what extent, does the concept of Spain's 'Golden Age' apply more specifically to the reign of Philip II than to the whole period 1474 - 1598? Justify your answer by reference to

In what ways, and to what extent, does the concept of Spain's 'Golden Age' apply more specifically to the reign of Philip II than to the whole period 1474 - 1598? Justify your answer by reference to the similarities and differences you detect between the periods before and after the accession of Philip II in 1556? A 'golden age' can be interpreted in many ways; it can be a time of great power for a monarch, or a country. It can be described as a time when some activity is at its peak, or as a period of great peace, prosperity and happiness. I will look at the period 1474 - 1598 to see if any of the monarchs' reigns meet any of these interpretations of a 'golden age'. The kingdom of Aragon had its own Cortes, which limited Ferdinand's power as he was subject to the fueros1. In Castile however, the Cortes were relatively powerless; not necessary to pass laws and had little interest in taxation. No Cortes was called between 1480 and 1498, which is indicative of Isabella's power. To help keep peace and control Isabella appointed 'corregidors', and town councillors. However these methods were unsuccessful; the town councils became too large and the 'corregidors' were disliked and were withdrawn in some cities; Segovia and Burgos, and Aragon. The Royal Council did not increase much in Ferdinand and Isabella's reign, as they dealt with matters in person and did not delegate to officials. ...read more.

They improved it greatly by gaining lands, and using marriage alliances to improve relations between Spain and rival countries. Charles or Philip did not experience this success, as their foreign policy often made matters worse. One of the definitions of a 'golden age' is a time of prosperity and Ferdinand and Isabella did bring about prosperity in their reign. They received their income from many places; taxation, loans and the church gave them the cruzada2. The Santa Hermandad3 raised 22 million maravedis a year in 1480, and by 1492 32 million maravedis a year. Ferdinand and Isabella loaned approximately 44 million maravedis from powerful aristocracy. From 1481 - 1510 the annual income had more than doubled from 150 million maravedis to 320 million maravedis a year and 90 percent of it was from the alcabala4, from which the noble and clergy were exempt. Ferdinand and Isabella did not just introduce new taxes but ensured the existing ones were collected efficiently; stating a record of taxes should be kept and tax farmers have their accounts audited every two years. By the end of the reign royal finances were stable, and had enough income to run the government during peacetime. In contrast Charles' finances were very poor; as early as 1523, Charles was told his next year's revenue had already been spent; Ferdinand and Isabella had mortgaged future income to pay for their wars. ...read more.

He was very powerful; he gained more lands increasing his power and, control over the Spanish church increased. However all the monarchs in the period 1474 - 1598 experienced this, so the whole period could be described as a 'golden age', as the monarchs were respected and loved, they had control over the nobles and the church and they had conquered more land making them more powerful. The concept of Spain's 'golden age' does not apply more specifically to Philip II's reign as it was not a 'golden age' in other ways. Philip endured many problems, experiencing bankruptcy four times, being at war with other countries and not making successful alliances. However, Ferdinand and Isabella's reign could be described as a 'golden age', as they were mainly at peace, they eradicated heresy and internal enemies, their finances were reasonably balanced, and they made Spain a great power in Europe. Word Count - 2278 words 1 The laws or traditions of the land 2 Annual payment to pay for the crusade against Granada 3 They were originally a peacekeeping force in Castile and Aragon, but they ended up supplying troops and money for the Crown. 4 Sales tax 5 Process that allowed towns to convert the sales tax into a fixed sum 6 A new church tax, levied on the income from property in each parish 7 A subsidy levied on 4 basic foodstuff; meat, wine, oil and vinegar 8 A church the monarch controls, even if officially the Pope does 9 Moriscos are converted Muslims and Conversos are converted Jews ?? ?? ?? ?? ...read more.