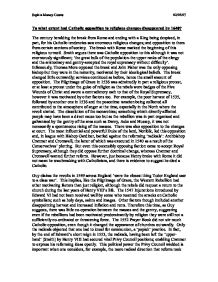 To what extent had Catholic opposition to religious changes disappeared by 1640?

To what extent had Catholic opposition to religious changes disappeared by 1640? The century heralding the break from Rome and ending with a King being despised, in part, for his Catholic tendencies saw enormous religious changes; and opposition to them from certain sections of society. The break with Rome marked the beginning of this religious turmoil. Smith argues there was Catholic opposition to this although it was not enormously significant; 'the great bulk of the population-the upper ranks of the clergy and the aristocracy and gentry-accepted the royal supremacy without difficulty'. Infamously, Thomas More opposed the break and John Fisher was the only opposing bishop but they were in the minority, motivated by their ideological beliefs. The break changed little outwardly; services continued as before, hence the small amount of opposition. The Pilgrimage of Grace in 1536 was admittedly in part a religious protest, or at least a protest under the guise of religion as the rebels wore badges of the Five Wounds of Christ and swore a contradictory oath to that of the Royal Supremacy, however it was motivated by other factors too. For example, the poor harvest of 1535, followed by another one in 1536 and the peacetime taxation being collected all contributed to the atmosphere of anger at the time, especially in the North where the revolt started. ...read more.

The arrival of Mary Queen of Scots in 1568 though meant the Catholics had a focus on which to build up opposition. The Revolt of the Northern Earls in 1569 was the first overt challenge to Elizabeth and although according to Smith 'it had important political and economic motives', the revolt was predominantly meant to restore Catholicism; a fact highlighted by the restoration of Catholic services wherever the rebels went. The revolt resulted in England's further polarization from Rome in the form of the Papal Bull excommunicating Elizabeth in 1570. The Ridolfi plot of 1571 shows that Catholic opposition had become more blatant, and Ridolfi had even gone so far as to seek foreign support, although the Duke of Alva, with troops stationed in the Netherlands, never gave his support. The most significant outcome of the plot was Norfolk's execution, thereby the removal of arguably the most vociferous, powerful and active member of the Catholic faction. Hence, Catholic power and strength of opposition was seriously reduced. With the gradual disappearance of the Marian priests, it seemed as if Elizabeth's policy of assimilation was working. The arrival of missionary priests from Douai in 1574 however, resulted in a slight reverse in this trend. ...read more.

The hostility directed towards Catholics remained steadfast for a long space of time, for example it was not until 1829 that Catholics could become MPs, 1850 that they could build their own churches and yet the monarch or heir to the throne still cannot marry a Catholic. This is the legacy that the century of religious strife has left. By 1640 therefore, Catholic opposition was negligible. Plots had ended, foreign support had waned and the Catholic church had come to live peacefully with the Anglican Church. As many proved over the century, patriotism to their monarch and country had often proved a more potent force than that of religion. They were a tolerated and predominantly seigneurial religion but were surrounded by fear and mistrust. So, Dickens' referral to the 'residual Catholicism' left by the 1550s ignores the fact that there were significant number of Catholics left by the end of Elizabeth's reign, due perhaps, as Bossy argues, to the efforts of the missionary priests without which Catholicism may well have died out in the face of strengthening Anglicanism. However, these 40,000 Catholics constituted only a 'minority religion'. [Dures] As Smith writes 'The Catholic community in 1625 was not a serious threat either to the authority of the Established Church or to the integrity of the English nation state'. Sophia Money-Coutts 02/05/07 ...read more.