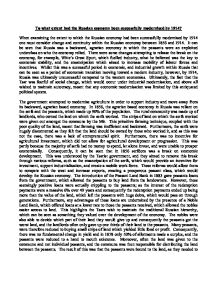 To what extent had the Russian economy been successfully modernised by 1914?

To what extent had the Russian economy been successfully modernised by 1914? When examining the extent to which the Russian economy had been successfully modernised by 1914 one must consider change and continuity within the Russian economy between 1856 and 1914. It can be seen that Russia was a backward, agrarian economy in which the peasants were an exploited underclass on who the economy relied. There were some changes attempting to release the break on the economy, for example, Witte's Great Spurt, which fuelled industry, what he believed was the key to economic stability, and the emancipation which aimed to increase mobility of labour forces and incentives. Whilst this was a successful period in economic, and industrial growth within Russia that can be seen as a period of economic transition moving toward a modern industry, however, by 1914, Russia was ultimately unsuccessful compared to the western economies. Ultimately, the fact that the Tsar was fearful of social change, which would occur under industrial modernisation, and above all wished to maintain autocracy, meant that any economic modernisation was limited by this antiquated political system. ...read more.

This connection between the peasant and the commune can be seen through the fact that only 2.4% of the 17.8 million peasants in Russia set up individual farms outside the commune. Furthermore, these reforms were limited by the preparation for war in 1914. Stolypin also aimed to improve the efficiency of agriculture, which he believed, would allow the peasants to prosper. Success can be inferred from the urban peasants working in the factories who returned to the commune for harvest increasing their chance of education and prosperity. There was further success in the presence of a few prosperous peasants known as Kulaks, however, this prosperity was not widespread and therefore it can be seen that the economic situation remained fairly constant. Productivity only increased by 1% per annum whilst the population was increasing at a higher rate, and therefore yields remained fundamentally unchanged. Whilst Stolypin ended redemption payments and poll taxes in hope of enhancing prosperity, taxes were increased in other areas and the peasants remained exploited, and the economic growth was therefore limited. The government saw the key to economic development not only as allowing prosperity but, paradoxically, by controlling the peasants; the promise of freedom offered under the emancipation was not something that was delivered by the Tsar; the peasants remained exploited and controlled. ...read more.

Finally, when examining the modernisation of the finance of Russia, one can see that the creation of a command economy... etc. restrictive. 1. Finance Situ: who pays for modernisation - restrictive Command economy- run by state, The development of the 5 1960 State banks and 4 commercial banks, which aimed to provide capital for investment, were a huge step towards modernisation of the economy, as the financial infrastructure is essential in any prosperous, modern economy, and links into the coherent programme of industrialisation. In January 1897, the Russia currency was returned to the gold standard, which created a more stable economy and currency, therefore encouraging trade and investment. This meant that the state were directly involved in the finance of industry through investment and therefore in the economic growth of country. However, Witte has been criticised for making Russia too dependant on foreign loans; he gained loans from France, UK and Germany which held high taxes and interest rates within Russia. Over half of all investment into Russia was into oil, mining and banking, which creates development in industry but, as this is investment from western Europe, the profit went out of Russia and failed to support, stabilise and modernise its economy. ...read more.