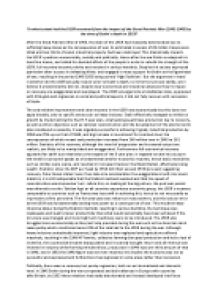 To what extent had the USSR recovered from the impact of the Great Patriotic War (1941-1945) by the time of Stalins death in 1953?

﻿To what extent had the USSR recovered from the impact of the Great Patriotic War (1941-1945) by the time of Stalin?s death in 1953? After the Great Patriotic War of 1945, the state of the USSR had massively deteriorated due to suffering heavy losses as the consequences of war, its estimated in excess of 20 million troops were killed and two thirds of soviet industrial property had been destroyed. This dramatically impacts the USSR?s position economically, socially and politically. Hence after the war Stalin re-adopted his hard-line stance, and called for doubled efforts of the people in order to rebuild the strength of the USSR, full recovery became priority and resulted in serious hardship. Despite this society expressed patriotism after success in defeating Hitler, and engaged in mass support for Stalin as the figurehead of war, resulting in the period 1945-1953 being coined ?High Stalinism.? But the argument in hand is whether did the USSR actually recover prior to Stalin?s death, to its former pre-war ability, and i believe it predominantly did not, despite clear economical and industrial advances they?re impact on recovery are exaggerated and overplayed. The USSR emerged into a totalitarian state, oppressed with little gain and regression in social and political aspects, it did not fully recover until succession of Stalin. ...read more.

This resulted heavy intensive labour being the Stalinist methods resulting in serious hardship, the technique was inadequate and lead to lower productivity than what would potentially have been achieved if the structure was changed and more high tech machinery were to be introduced. The USSR also struggled more economically as they lost help provided during the war such as the American Land Lease policy which constituted some 23% of the total aid to the USSR during the war. Although heavy industry undoubtedly improved, light industry was neglected and agriculture suffered massively, resulting in the 1946-47 famine, collective farming disrupted production and led to lack of incentive, the countryside became depopulated and it scarcely brought return and all revenue was invested in industry whilst farming remained low, production in 1946 was one third amount of that in 1940, and in 1952 the 1940 figure was not even reached, this implies the economy was not as successful and expressed and furthermore has regressed in some areas rather than recovered. Politically, there was no recovery but purely regression, both on an international and domestic level. In 1945 Stalin during the war co-operated and built alliances in Europe with countries alike Britain, by 1953 these relations had vastly deteriorated and instead developed into fierce ...read more.

There was no investment in the people, no attempt to raise standard of living or reward efforts made, instead Stalin focused on the cold war and militarial build up. People were subjected to the cruelty of the gulags, even soldiers (Norman Lowe estimated 2.8m) as they were believed to have seen too much of western civilisation and therefore a threat to the state. People were forced into hysterical isolation, completely disconnected from the outside world and subject to constant threat and suspicion from the secret police led but the intimidating Beria. People had nothing, essentials were in scarce supply. People faced heavy intensive labour, and could not express discontent due to the probability of exile, they face heavy rations due to low grain production and religion was just tolerated, so long as it promoted Stalin. Also Zhdanov?s cultural reforms ensured intellects that would normally formulat public opinion followed directives from high, these are known as ?cultural reforms? There was no diversity, ambition, or opportunity, people were just the mechanism to bring economical wealth at the expense of their own standards of living. As expressed by Christopher Read society was ?rigid and cowed? this can be seen evidently in policies such as Russification being reintroduce to strengthen support in the state and Anti-Semitism resurfacing, you had to abide in the national cohesion despite no gain of communism over capitalism. ...read more.