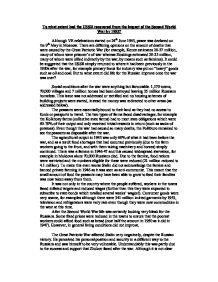 To what extent had the USSR recovered from the impact of the Second World War by 1953?

To what extent had the USSR recovered from the impact of the Second World War by 1953? Although VE celebrations started on 24th June 1945, peace was declared on the 9th May in Moscow. There are differing opinions on the amount of deaths that were caused by the Great Patriotic War (for example, Kenez estimates 26-27 million, many of whom were prisoner's of war whereas Hoskings estimated 20-25 million, many of whom were killed indirectly by the war, by means such as famines). It could be suggested that the USSR simply returned to where it had been previously in the 1930s after the war, for example primary focus for industry was put on "heavy" goods such as oil and coal. But to what extent did life for the Russian improve once the war was over? Social conditions after the war were anything but favourable. 1,170 towns, 70,000 villages and 7 million homes had been destroyed leaving 25 million Russians homeless. This issue was not addressed or rectified and no housing schemes of building projects were started, instead the money was redirected to other areas (as addressed below). ...read more.

This was to ensure support for the leadership of the country and unite the Russian people against the Axis powers. The cult of personality reached its peak on Stalin's 70th birthday in 1949 and this was accompanied by a new programme of censorship (for example newspapers were censored once before publishing and once after) and propaganda. Intellectual life in Russia also suffered shut in order to eradicate opposition, for example archives were shut in the 1930s and original research was discounted. All areas were affected, including literature where writers who were seen to be non-ideological were purged (by expelling them from the Union of soviet writers). Whether or not this is a sign of "recovery" after the war depends on whose perspective taken - for the Russian people it was a tightening in society that had a negative effect whereas members of the communist party or Stalin's supporters would see this as "recovery" from the loosening in control and a sign that Stalin's power was being re-asserted. The results of Stalin's paranoia had a negative effect for the Russians, even if they had not been directly aware of it at the time. ...read more.

previous to the war (and certainly during the war when he was forced to accept suggestions from more experienced military men such as General Zhukov). Stalin did ensure however, that the soldiers that joined the Communist party during the war were educated in Communist values through the new Central Committee Higher Party School that was set up. Stalin also delegated some areas of control to other groups due to the huge workload he faced, for example the economy was given to the USSR Council of Ministers. However, he also put a strict hierarchy of decision making into practice to ensure that he still essentially made all the decisions. It still appears however that the improvements made after the war fail to outweigh the negatives both in number and significance. The Great Patriotic War had left Russia severely weakened and the Russia nation crushed. Although the economy did appear to improve slightly after the war (increase of 8.9% in the GNP) and Stalin re-asserted his control, Russia remained how it had been run in the 1930s previous to the war (no improvements or innovations within industrial production and living conditions remained poor) and therefore Soviet Union had not recovered well by 1953. ?? ?? ?? ?? ...read more.