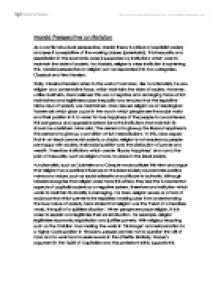 To what extent was Britain and France responsible for the fall of Poland in 1939?

Marxist Perspective on Religion As a conflict structural perspective, Marxist theory is critical of capitalist society and sees it as exploitive of the working classes (proletariat). This inequality and exploitation in the economic base is supported by institutions which work to maintain the state of society. For Marxists, religion is a key institution is achieving this. Marxist perspective on religion can be separated into two categories, Classical and Neo Marxism. Firstly, Classical Marxism refers to the work of Karl Marx. Like Functionalists, he saw religion as a conservative force, which maintains the state of society. However, unlike Durkheim, Marx believed this was a negative and damaging force which maintained and legitimised class inequality and ensured that the exploitive Status Quo of society was maintained. Marx viewed religion as an ideological framework which plays a part in the way in which people see the social world and their position in it. In order for true happiness of the people to be achieved, this dangerous and oppressive system (and the institutions that maintain it) ...read more.

His work suggests that it was Protestant Calvinism whose principles encouraged the hard work ethic among working classes which contributed to the Industrial Revolution. Economic success is determined by the pre-destination of god. Those that prosper are proved to be part of the 'elect', therefore it is wrong to question poverty or exploitation as this ultimately questions God's will. Marx argued that religion was the 'opium of the people'. In this sense, Religion is alienating. It creates misery preventing the proletariat from changing or realising their social position. Furthermore, it acts as a drug anesthetising the pain of this and making the proletariat want more. However, it is arguable that Marxist utopian principle of communism can be seen as a religion. When using the expansive definition of religion Robertson argues that communism shapes and influences people's life, almost as a religion. In some nations, for example in Stalinist Russia or Maoist China, political leaders are idolised to an almost godlike status and the people are bound under the principles of communism. ...read more.

Additionally, hierarchy in religion can be transmitted to hierarchy in society. Gramsci argues that religion contributes to the maintenance of hegemony: ideological dominance of the masses by a few. Particularly, the fascist state under Mussolini was aided by the Roman Catholic Church, in terms of ideological support. Religious leaders are often closely linked with the state so therefore support capitalism as they offer their support to capitalist governments. The limitations of Marxism can suggest that Religion acts as a force for change rather than a conservative force. However, at the time of Marx writing, religion less broad and more organised than today. The leading institutions of the Catholic and Protestant Churches in Western Europe were central rather than other dominations, cults and sects. Finally, one criticism of Marxism is the secularisation argument. While less than 10% of the population now regularly attend church it can be argued that religion does not have enough of an influence on people's life to be oppressive. We now live in a postmodern society where society is no longer so economically deterministic; therefore it can be argued that there is no longer oppression by the ruling classes. ...read more.