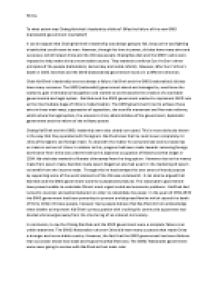 To what extent was Chaing Kai-sheks leadership a failure?

﻿Emma To what extent was Chaing Kai-shek?s leadership a failure? (Was the failure of the new GMD (nationalist) government inevitable?) It can be argued that Chaing Kai-shek?s leadership was always going to fail, because he was fighting a battle that could never be won. However, through his time in power, did also have many aims and successes, which helped china and the Chinese people. Chaing Kai-shek and the GMD?s aims were imposed to help make china a more stable country. They wanted to enforce Sun Yet Sen?s three principles of the people (nationalism, democracy and social reform). However, after Sun Yet Sen?s death in 1925, Kai-shek and the GMD (nationalists) ...read more.

Chaing Kai-Shek and the GMD, leadership were also clearly corrupted. This is most obviously shown in the way that they operated with foreigners. Kai-Shek knew that he could never completely rid china of foreigners and foreign trade. To deal with the matter he compromised and increased tax on trade in and out of china. In relation to this, progress had been made towards removing foreign dominance from china was undermined by the Japanese occupation of Manchuria that began in 1934. Kai-shek also wanted to liberate china away from the drug opium. However due to the money made from opium trade, Kai-Shek made opium illegal but also had a part in the marketing of opium to benefit from the income made. ...read more.

Kai-Shek had turned to coercion and authoritarianism in order to consolidate his power. In the years of 1934-1935 the GMD government had been powerless to prevent a widespread famine which caused the death of thirty million Chinese people, however many people believe that Kai-Shek did not acknowledge these deaths as important. Kai-Shek?s preoccupation with crushing his communist opponents had divided vital energies away from the structuring of an ordered civil society. In conclusion, to say the Chaing Kai-Shek and the GMD government were a complete failure is an unfair statement. The GMD/ Nationalist rule over China did have many successes that made China a stronger and more stable country. However, the fact that the GMD government had more failures than successes shows how weak and hypocritical Kai-Shek was. The GMD/ Nationalist government were never going to survive with Kai-Shek as their main ruler. ...read more.