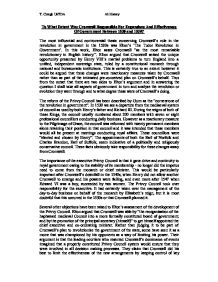 To What Extent Was Cromwell Responsible For Expansions

To What Extent Was Cromwell Responsible For Expansions And Effectiveness Of Government Between 1530 and 1539? The most influential and controversial thesis concerning Cromwell's role in the revolution in government in the 1530s was Elton's 'The Tudor Revolution in Government'. In this work, Elton asses Cromwell "as the most remarkable revolutionary in English history.". Elton argued that Cromwell seized the unique opportunity presented by Henry VIII's martial problems to turn England into a unified, independent sovereign state, ruled by a constitutional monarch through national and bureaucratic institutions. This is certainly true to an extent however it could be argued that these changes were reactionary measures taken by Cromwell rather than as part of the intimated pre-conceived plan on Cromwell's behalf. Thus from the outset that there are two sides to Elton's argument and in answering the question I shall take all aspects of government in turn and analyse the revolution or evolution they went through and to what degree these were of Cromwell's doing. The reform of the Privvy Council has been described by Gunn as the "cornerstone of the revolution in government". In 1530 we see a departure from the mediaeval system of council as used by both Henry's father and Richard III. During the reigns of both of these Kings, the council usually numbered about 200 members with seven or eight professional councillors conducting daily business. However as a reactionary measure to the Pilgrimage of Grace, the council was reformed with twenty permanent members alone retaining their position in that council and it was intended that these members would all be present at meetings conducting royal affairs. ...read more.

I would thus agree with Davies when he said that; "Cromwell appears to have been the last statesman to proliferate new developments on mediaeval principles." Thus I would argue that despite very little infrastructure of finance being changed, those changes in protocol were to a large extent, the work of Cromwell in the 1530s. Elton's theory on the subject is exaggerated but I agree in principal with the notion that Cromwell was key in the coming about of these changes to royal finances. With regard to the King's Household, Elton exaggerated the extent to which 'normal' mediaeval government was centred on the household - e.g. the chamber finance of Edward IV and Henry VIII was an emergency measure, part of the rebuilding of royal power after the breakdown of the 1450s and 60s. By Henry's own reign, with the successful restoration of royal authority, household government was less necessary. Elton's revolution theory is that the role of the household was diminished by the creation of individual departments acting in the King's interests rather than on his personal command in every matter. The King's Privvy Chamber at the heart of the household continued to play a pivotal role in government in 1530s. This is shown by Cromwell's powerful influence derived from household positions such as Master of the Jewel House and his utilisation of this to influence personnel appointments within the house. Indeed Cromwell used informal, personal methods instead of bureaucratic methods e.g. ...read more.

Reformation acts removed any limit on power of statute; Parliament gained the power to deal with spiritual matters; it overrode property rights on a massive scale. Cromwell devoted far more attention to the management of parliament than any other minister, to ensure its acceptance of royal policy; he discouraged known critics & encouraged supporters of royal policy; prepared propaganda pamphlets; held the first by-elections to fill vacancies. The success of Cromwell's effort is shown by the passage of legislation through the 1530s. Through his mastery and manipulation of the workings of parliament, Cromwell was able to cause as Elton described it the "development of constitutional monarchy". Personally I believe constitutional monarchy to be hyperbole, however there is a definite Cromwell led movement away from mediaeval towards modern use of parliament. By looking at these aspects of government change in the 1530s, I would argue that, Cromwell for the most part was implementer of the King's will, yet with certain issues, Cromwell was the architect of the revolution in government during the 1530s. His dominance over parliament, the manipulation of his household positions and his magnificent extension of royal power made his rise to power unstoppable. However his own mistakes would lose Cromwell his life even at the height of his influence and remit. Elton's thesis on Cromwell's involvement and role are largely exaggerated, however the thesis in principal is accurate in that whether through execution of the King's will or his won personal pre-conceived plans, Cromwell was hugely responsible for this revolution in government. ?? ?? ?? ?? T. Clough U6TDA A2 History Mrs. Wilde ...read more.