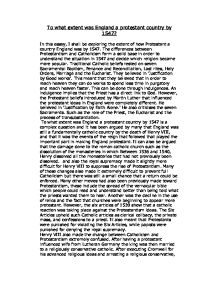 To what extent was england a protestant country by 1547

To what extent was England a protestant country by 1547? In this essay, I shall be exploring the extent of how Protestant a country England was by 1547. The differences between Protestantism and Catholicism form a solid base in order to understand the situation in 1547 and decide which religion became more popular. Traditional Catholic beliefs rested on seven Sacraments: Baptism, Penance and Reconciliation, Last rites, Holy Orders, Marriage and the Eucharist. They believed in 'Justification by Good works'. This meant that they believed that in order to reach heaven they can do works to spend less time in purgatory and reach heaven faster. This can be done through indulgences. An indulgence implies that the Priest has a direct link to God. However, the Protestant beliefs introduced by Martin Luther that influenced the protestant ideas in England were completely different. He believed in 'Justification by Faith Alone.' ...read more.

Another was the decline in the use of relics and the fact that churches were beginning to appear more protestant. However, the six articles of 1539 show that a catholic reaction was taking place against the Protestantism ideas. The Six Articles upheld such Catholic articles as clerical celibacy, the private mass, and confessions to a priest. It also meant that Protestants were punished for violating the Six Articles, while papists were punished for denying the royal supremacy. Henry VIII also made the change between Catholicism and Protestantism extremely confused. After having a protestant influenced wife from Lutheran Germany the king was then married to a religiously conservative catholic. After executing Cromwell for his advanced religious ideas and arresting a religious conservative, Henry VIII also executed his Catholic wife and remarried to Catherine Parr who again had protestant sympathies. During the year of Henry VIII's death, his regency council of extremely conservative catholic men was replaced with a group who quickly established Protestantism. ...read more.

Although this document was slightly more conservative it also contained strong hints of Protestantism and was seen as a way of testing public opinion. Each of these documents shows that England was completely undecided and very split amongst its ideas of religion. England was still primarily catholic when Henry VIII died; however, many parts of the old church had been destroyed. The manner in which Henry VIII played upon the anti-clerical feelings of many in Parliament was crucial to the advancement of Protestant religious doctrines in later decades. At the time of Henry's break from Rome, the English people were relatively content with the teachings of the Catholic Church, although occasionally resented hypocritical and worldly priests. The competing religious tendencies between government and people did not work themselves out in favour of a more Protestant England until after 1547. Henry always considered himself "catholic" in his beliefs and wished the Church of England to remain so as well: he considered the extremes of both Roman Catholicism and heretical Protestantism and tried contain them both in almost his own religion. ...read more.