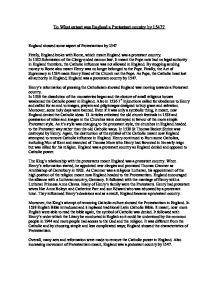 To What extent was England a Protestant country by 1547?

To What extent was England a Protestant country by 1547? England showed some aspect of Protestantism by 1547 Firstly, England broke with Rome, which meant England was a protestant country. In 1532 Submission of the Clergy ended cannon law. It meant the Pope now had no legal authority in England therefore, the Catholic influence was not allowed in England. By stopping sending money to Rome also meant Henry was no longer belonged to the Pope. Finally, the Act of Supremacy in 1534 made Henry Head of the Church not the Pope. As Pope, the Catholic head lost all authority in England; England was a protestant country by 1547. ...read more.

As it's style was changing to the protestant style, the churches in England headed to the Protestant way rather than the old Catholic ways. In 1538 St Thomas Becket Shrine was destroyed by Henry. Again, the destruction of the symbol of the Catholic meant now England attempted to remove Catholic influence in England. Henry continued to Burn some Catholics, including Nun of Kent and executed of Thomas More who Henry had favoured in his early reign but was killed for his religion. England was a protestant country as England denied and opposed to Catholic power. The King's relationship with the protestants meant England was a protestant country. When Henry's reformation started, he appointed new clergies and promised Thomas Cranmer as Archbishop of Canterbury in 1933. ...read more.

They influenced Henry's decisions and as a result, England became a protestant country. Moreover, the King's attempt of removing Catholic culture showed the Protestantism in England. In 1538 English Bible introduced and it replaced traditional Latin Catholic Bible. It meant, now more English were able to read the bible again, the symbol of Catholic was denied. It followed with Henry's order which the Litany be conducted in English so it could be understood by the common people in 1944 and more people had access to the God and the religion. It was different from the Catholic and by choosing simple and less complicated ways; England showed the characteristics of Protestantism. Overall, many acts and reformation were made to remove the Catholic power in England. Also increasing movement of Protestantism meant, England was a protestant country by 1547. ...read more.