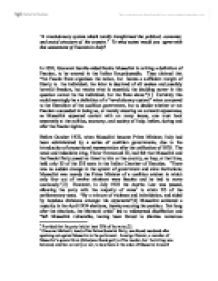 To what extent was Fascism in Italy a revolutionary system that totally transformed the political, economic and social structure of the country?

"A revolutionary system which totally transformed the political, economic, and social structure of the country." To what extent would you agree with this assessment of Fascism in Italy? In 1932, Giovanni Gentile aided Benito Mussolini in writing a definition of Fascism, to be entered in the Italian Encyclopaedia. They claimed that "the Fascist State organises the nation, but leaves a sufficient margin of liberty to the individual; the latter is deprived of all useless and possibly harmful freedom, but retains what is essential; the deciding power in this question cannot be the individual, but the State alone."[1] Certainly this could seemingly be a definition of a "revolutionary system" when compared to the liberalism of the coalition government, but to decide whether or not Fascism succeeded in being so, or merely showing an outward appearance, as Mussolini appeared content with on many issues, one must look separately at the politics, economy, and society of Italy, before, during and after the Fascist regime. Before October 1922, when Mussolini became Prime Minister, Italy had been administered by a series of coalition governments, due to the introduction of proportional representation after the unification of 1870. The weak and indecisive king, Victor Emmanuel III, had felt that Mussolini and the Fascist Party posed no threat to him or the country, as they, at that time, held only 35 of the 535 seats in the Italian Chamber of Deputies. ...read more.

The attempt at self-sufficiency was a dismal failure." [12] Industry was greatly encouraged with government subsidies, ensuring the appearance of a Corporate State, which helped to increase iron and steel production by 100% by 1930 and to double the production of hydro-electric power by 1937, but more could have been done as Belgium had increased to a much higher level. Also, "little had been done to remedy her basic shortages of raw materials - coal and oil."[10] At the same time, another of Mussolini's ploys to show a strong Italy to the world, was to value the Lira too high on the world markets. 90 Lira could be purchased for �1 in 1926, although a rate of 150 to the pound would have been more advisable for Italy's failing economy. The outcome was that exports became too expensive and therefore orders dwindled, especially in the textile industry, and so many factories were forced into a three day working week. Even when The Wall Street Crash caused further hardships, Mussolini still refused to devalue the Lira until 1936. Further harm to the economy was caused by the Fascist's love of war. As Mussolini said, "peace is absurd: fascism does not believe in it."[13] The Corfu Incident4 of 1923, the War in Abyssinia in 1935-365 and Italy's intervention in the Spanish Civil War were all an unnecessary drain on the Italian purse. ...read more.

Amerigo Dumini, a member of Mussolini's special force (Ceka)was found guilty of the murder, but the killing was believed, whether correctly or not, to have been at the order of Mussolini himself. 3 Battle for Wheat = by 1935 wheat imports had been cut by 75% 4 Diplomatic Emergency in 1923. Greece and Albania quarrelled over boundaries and the League of Nations set up a commission to make a determination. At this time 4 Italians, including General Tellini, were killed on the Greek side of the border. Mussolini sent an ultimatum to Greece's government to pay 50 million Lira in compensation and to execute the assassins. As the assassins could not be identified, Greece could not comply and so Italian forces bombarded and occupied the Greek island of Corfu in August 1923. Greece was forced to pay reparations and apologise, by the Conference of Ambassadors and Italy left Corfu on 27th September 1923.[14] 5 An armed conflict that resulted in Ethiopia's subjection to Italian rule [15] 6 The Papacy had been hostile to the Italian Government ever since losing sovereignty over the Vatican City in the 1870 unification. Mussolini recognised the Vatican City as a sovereign state, paid compensation to the church and made the Roman Catholic faith the official state religion with compulsory religious education in schools. ?? ?? ?? ?? ...read more.