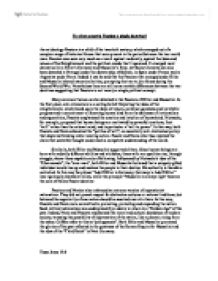 To what extent is Fascism a single doctrine?

To what extent is Fascism a single doctrine? As an ideology Fascism is a child of the twentieth century, which emerged out of a complex range of historical forces that were present in the period between the two world wars. Fascism was seen very much as a revolt against modernity, against the ideas and values of the Enlightenment and the political creeds that it spawned. It emerged most dramatically in Hitler's Germany and Mussolini's Italy, yet fascist elements can also been detected in Portugal under the dictatorship of Salazar, in Spain under Franco and in Argentina under Peron. Indeed it can be said that the Fascism that emerged under Hitler and Mussolini shared many similarities, prompting the two to join forces during the Second World War. Nonetheless there are still some notable differences between the two doctrines suggesting that Fascism is not merely a single political concept. Many common themes can be detected in the Fascism of Hitler and Mussolini. In the first place, anti-rationalism is a uniting belief. Rejecting the ideas of the enlightenment, which based upon the ideas of reason, universal goodness and inevitable progress and a commitment to liberating human kind from the darkness of irrationalism and superstition, Fascists emphasised the emotion and intuition of humankind. ...read more.

Furthermore, both Nazis and Fascists are united in their anti-Capitalist and anti-Marxist nature. Fascism and Nazism found themselves at odds with Capitalism as they placed the community above the individual, reflected in the phrase "Common Good before Private Good" inscribed on the n**i coin. Since Capitalism is based upon the pursuit of self-interest it thus threatens to undermine the cohesion of the nation. Fascists and Nazis believe that uniting workers and employers under the state could prevent class conflict. This was most vividly expressed in Mussolini's Corporate State. Similarly, Fascist and Nazis aimed to lure the working class away from Marxism, which preached the idea of an international working class, which again undermined the principles of national unity and integration. Finally, Fascism and Nazism are unique in their glorification of war and struggle. Indeed, Mussolini proclaimed that "war is to men what maternity is to women", while Hitler emphasised the need to go to war every 25 years. Subscribing to Social Darwinism, Fascists and Nazis regarded struggle as the natural and inevitable condition of both social and international life. Only competition and conflict could ensure human progress and guarantee that the fittest and strongest prosper in a process of elimination entitled the "survival of the fittest". ...read more.

Similarly, throughout Mussolini's regime, the Italian monarchy survived, many local politicians continued in power and the Catholic Church retained its privileges and independence. The Italian state thus operated more as a personalised dictatorship rather than a totalitarian dictatorship. Finally, Italian and German brands of Fascism differ in their attitudes towards modernism. While Mussolini was keen tom portray Italy as a modernising force and embrace the advantages of modern industry and technology, Hitler condemned modern civilisation as decadent and corrupt. In this way, he promoted the image of a peasant people suited to a simple existence. This peasant ideology had important implications for foreign policy-in order to restore the German people to their proper peasant existence, territorial expansion, "Lebensraum", was crucial. In conclusion, it can be said that Fascism ids a single coherent doctrine to a certain extent since both Nazism and Italian Fascism share many fundamental beliefs. The ideas of both helped to shape the doctrine of Fascism and had profound influences on other Fascist regimes both in Europe and abroad. Most notably, Franco's Spain and Vichy France drew many of their central beliefs from the regimes of Hitler and Mussolini. Yet, there are many significant differences and the two should be treated as separate doctrines owing to the profound clashes over areas such as race and the state. Tessa Jones 13.9 ...read more.