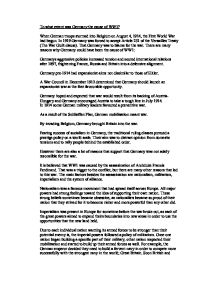 To what extent was Germany the cause of WW1?

To what extent was Germany the cause of WW1? When German troops stormed into Belgium on August 4, 1914, the First World War had begun. In 1919 Germany was forced to accept Article 231 of the Versailles Treaty (The War Guilt clause). That Germany was to blame for the war. There are many reasons why Germany could have been the cause of WW1: Germanys aggressive policies increased tension and soured international relations after 1897, frightening France, Russia and Britain into a defensive alignment. Germany pre-1914 had expansionist aims not dissimilar to those of Hitler. A War Council in December 1912 determined that Germany should launch an expansionist war at the first favourable opportunity. Germany hoped and expected that war would result from its backing of Austria-Hungary and Germany encouraged Austria to take a tough line in July 1914. ...read more.

Nationalism was a famous movement that had spread itself across Europe. All major powers had strong feelings toward the idea of supporting their own nation. These strong beliefs sometimes became obsessive, as nationalists became so proud of their nation that they strived for it to become richer and more powerful than any other did. Imperialism was present in Europe for sometime before the war broke out, as each of the great powers aimed to expand theirs boundaries into new areas in order to use the opportunities that the new land held. Due to each individual nation wanting its armed forces to be stronger than their potential enemy is, the imperial powers followed a policy of militarism. Once one nation began building a specific part of their military, other nation respected their mobilization and started to build up their armed forces as well. ...read more.

France and Russia agreed to help each other if any of them were attacked. Britain and France overlooked their earlier conflicts and prepared to go into a union with Russia. Once one country decided to go to war with another country in the other alliance, the additional countries declared war against on the opposing alliances as well. Out all for of the causes of WWI, nationalism was the strongest reason of the war. Countries had to also consider imperialism in order to fore fill their beliefs of nationalism. To defend their new territory, countries militarized. When other countries recognized a nation building up a military, they also begin militarizing to defend reputation and themselves. Also, due to militarism, many countries formed alliances with other countries. I believe that Germany was responsible for WW1. As they were the first country to invade another country, hence they started the war. ...read more.