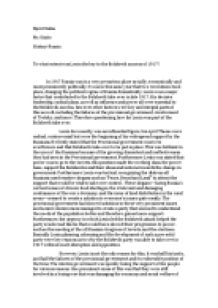 To what extent was Lenin the key to the Bolshevik success of 1917?

﻿Njeri Muhia Mr. Kizito History-Russia To what extent was Lenin the key to the Bolshevik success of 1917? In 1917 Russia was in a very precarious place socially, economically and most prominently politically. It was in this same year that two revolutions took place, changing the political regime of Russia dramatically. Lenin was a major factor that contributed to the Bolshevik take over in late 1917. His decisive leadership, radical plans, as well as influence and power all were essential to the Bolshevik success, however other factors were key and integral parts of this as well, including the failures of the provisional government, involvement of Trotsky, and more. Therefore questioning how far Lenin was part of the Bolshevik take over. Lenin fore mostly, was an influential figure, his April Theses were radical, controversial but were the beginning of his widespread support by the Russians. He firstly stated that the Provisional government was to be overthrown and that Bolshevik take-over to be put in place. ...read more.

Furthermore, the urgency in which Lenin led the Bolshevik attack helped the party evade road blocks that would have slowed their progression to power, such as the meeting of the All Russian Congress of Soviets, and the elections. Basically Lenin planning, scheming and the development of such a powerful party were key reasons as to why the Bolshevik party was able to take over in 1917 without much disruption and opposition. However, Lenin is not the only reason for this, it was half his tactic, and half the failures of the provisional government and its vulnerable position of the time. The interim government was quickly losing the support of the people for various reasons. One prominent cause of this was that they were still involved in a losing war that was damaging the economy and social welfare of Russia. The war also caused a division between the provisional government and the Petrograd Soviet, the soviet which had the support of most of the working class. ...read more.

Trotsky managed to become a leader of the Military Revolutionary Committee and thus was able to organize, lead and mobilize the only effective military force in Petrograd. Trotsky also helped Lenin draft plans in overthrowing the Provisional government, enabling the Red Guards to go out and begin the Bolshevik take over. Without Trotsky, Lenin would not have had an inside eye and hand in Russia being capable of protecting the Bolshevik position and power in Petrograd. Lastly, because many other revolutionary had regarded the February revolution as the main revolution and had supported the Provisional government seeing as they had promised to uphold the interests of Russians, such as the Social Revolutionaries, had firstly, lost support of the population because of their support, and furthermore had no plans in uprising against the prominent Bolshevik power and presence. Therefore as much as Lenin and his leadership were real reasons in the success of the Bolsheviks in 1917, these other reasons contributed to the same. The take over of the Bolsheviks, was one that was tactical decisive, but also very lucky in terms of timing and place. ...read more.