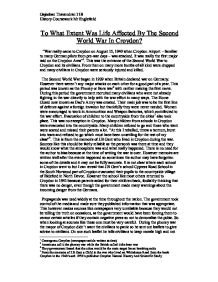 To What Extent Was Life Affected By The Second World War In Croydon?

To What Extent Was Life Affected By The Second World War In Croydon? "War really came to Croydon on August 15, 1940 when Croydon Airport - familiar to many German pilots from pre-war days - was attacked. It was really the first major raid on the Croydon Area"1. This was the entrance of the Second World War to Croydon and its civilians. From then on many more bombs of all kind were dropped and many civilians in Croydon were seriously injured and killed. The Second World War began in 1939 when Britain declared war on Germany. However there weren't any major attacks on each other for a good part of a year. This period was known as the Phoney or Bore war2 with neither making the first move. During this period the government recruited many civilians who were not already fighting in the war directly to help with the war effort in many ways. The Home Guard now known as Dad's Army was created. Their main job was to be the first line of defence against a foreign invasion but thankfully they were never needed. ...read more.

"There was a lack of proper lighting arrangements on the night in question and night flying in Croydon should be organised"9 was the conclusion of a court inquest done at the time. The sources, which I have used in writing this paragraph, are found in the books Surrey at war by Bob Olgey and Croydon Airport and the battle for Britain by Douglas Cluett. The books were published well after the war was finished and so the authors would have had more access to more information and archives as they would have been published well after the war as the government would of wanted to keep a lot of the information hushed up during the war. The writers also have hindsight, which is a major advantage, and there is no need to be bias or contain any inaccurate figures because the war is well finished and so morale doesn't have to be high. I can conclude using these facts that the sources are very accurate and contain a great deal of truth. On the 15th August the first bombs were dropped on Croydon on houses and factories on the Waddon estate around the airport. ...read more.

Anyway the airport meant bombs and this meant for the people of Croydon nights in the uncomfortable Anderson Shelters. Yes indeed life was extensively affected to the average Croydon person because of the war. 1 Courageous Croydon (newspaper article written at time) 2 Americans call it the phoney war while the British called it the bore war 3 They government feared that the cities would be the main target for an bombing raids 4 From the memoirs of J.B Gent a Child in the war who lived on Whitehorse Road from the book Croydon in the 1940's and 1950's publisher Croydon Natural History And Scientific Study 5 See Appendix One 6 Surrey at war by Bob Olgey 7 An Aircraft used during the war for the war effort 8 Croydon Airport and the Battle For Britain by Douglas Cluett 9 Report by a court from the inquest 10 Report Courageous Croydon can be found in the booklet. 11 Croydon in the 40's and 50's 12 An exhibition on the Second World War. 13 From The Memoirs of Bob Dowie 14 Results can be found in the back of Surrey at War by Bob Olgely 15 Newspaper article written at time Gajeeban Thavendran 11B History Coursework Mr Englefield ...read more.