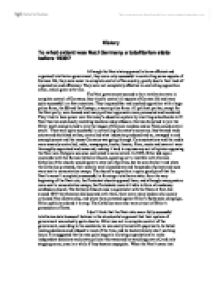 To what extent was Nazi Germany a totalitarian state before 1939?

History To what extent was Nazi Germany a totalitarian state before 1939? Although the Nazi state appeared to be an efficient and organised totalitarian government, they were only successful in controlling some aspects of German life, they were never in complete control of the country, greatly due to their lack of organisation and efficiency. They were not completely effective in controlling opposition either, which grew with time. The Nazi government seemed to be a totalitarian state in complete control of Germany; they tried to control all aspects of German life and were quite successful in a few occasions. They imposed fear and crushed opposition with a huge police force, the SS and the Gestapo, a secret police force. All political parties, except for the Nazi party, were banned and many political opponents were persecuted and murdered. They tried to have power over Germany's education system by rewriting schoolbooks to fit Nazi theories and closely watching teachers and professors. German boys had to join the Hitler youth and girls had to join the league of German maidens and so Nazis could control youth. ...read more.

The Catholic Church was in agreement with the Nazis at first, but around 1937 they became disillusioned with them, there were many leaders who openly criticised Nazi dictatorship, and when they protested against Hitler's Euthanasia campaign, Hitler publicly ordered it to stop. The Catholics were also very critical of Hitler's persecution of Jews. I don't think that the Nazi state was a fully successful totalitarian state because I believe in the structuralist argument that their system of government was actually quite chaotic. Hitler was not in complete control of the government, according to his assistants, he was easily bored with paperwork, he hated making decisions and refused to most of the time, and he had extremely short working hours. It is suggested that he was quite happy in allowing organisations to make independent decisions and create policies they assumed he would approve of, and only stopping some, once in a while if they became unpopular. When the Nazi's came into power, the existing government organisations of the civil service didn't leave power, they were supposed to be controlled and supervised by a variety of Nazi party bodies, but ministers, such as von Krosigk and Schacht managed to preserve traditions of their departments. ...read more.

There was quite a lot of underground resistance; working class groups produced anti government leaflets, people sabotaged factories, railways and army depots, some refused to join the party or contribute to Nazi funds and members of banned political parties continued to meet in secret. Some people like pastors Grueber and Zwanziger helped Jews. A lot of people were very happy with Hitler and felt no need to oppose him, Nazis were very concerned about pleasing important groups in society and did moderate policies to satisfy the general public, in 1938 there was widespread disapproval of the persecution of Jews. The government succumbed in a way, they continued to persecute Jews but kept it secret. The most successful aspect of the Nazi rule was probably the propaganda, which led people to believe that Hitler was in complete control of Germany and that the Nazi government was organised, effective and in full power over the lives of everyone in Germany. This is only true to a certain extent; the government was far from organised and effective and it never managed to fully control local governments who followed policies they wished to, and they were not completely successful in controlling the old government hierarchies and resistance from people. ...read more.