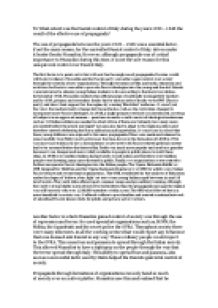 To what extent was the Fascist control in Italy during the years 1925 - 45 a result of effective propaganda?

﻿To What extent was the Fascist control of Italy during the years 1923 ? 1945 the result of the effective use of propaganda? The use of propaganda between the years 1923 ? 1945 was a essential factor, if not the main reason, for the unrivalled Fascist control of Italy, driven under it leader Benito Mussolini. However, although propaganda was of critical importance to Mussolini during this time, it is not the sole reason for this unequivocal control over Fascist Italy. The first factor is to point out is that with out the thorough use of propaganda, Fascism would still be in its infancy. Mussolini and his Fascist party were able to gain control over society through the creation of new organisations. Through the means of film and radio, education and activities the Fascists were able to provoke Fascist ideologies into the young and the old. Schools were instructed to educate young Italian students to live according to the fascist revolution. In December 1925, Mussolini conducted an official purge of ?politically incompatible? teachers and by 1929, primary and secondary faculty had to take an oath of loyalty to the PNF (Fascist party) and show their support for the regime by wearing ?Blackshirt? uniforms. ...read more.

It offered welfare to poor families and created a national network of subsidised Fascist leisure clubs for public and private sector workers. Another factor in which Mussolini gained control of society was through the use of repression and terror. He used specialist organisations such as, MSVN, the Militia, the Squadrisiti and the secret police the OVRA. Throughout society there were many informers, in all the working sectors that would report any behaviour that was deemed anti Fascist in any way. These ordinary people would report to the OVRA. This cause fear and paranoia to spread through the Italian society. This allowed Mussolini to have a tight grip on the people through the way that the terror spread through Italy. This ability to spread fear and paranoia, also seen as a successful tactic used by Stalin helped the Fascists gain total control of society. Propaganda through formations of organisations can only hand so much of society over on a silver platter, Mussolini saw this and realised that he would need another form propaganda to gain more of a grip on Italy. He thus introduced political and social policies, which when successful pass yet more control over to him. ...read more.

Mussolini offered to heal the relationship; he did this by introducing Religious Studies into the education system. This pleased the Pope and therefore Mussolini recruited the loudest voice to spread the party?s ideology. Mussolini also went after the King, as he still had the power of martial law. Mussolini negociated that he would remain he monarch of the country but Mussolini would have the same powers as him under his title, Duce. The one thing the King lost was in 1928, the right to select Prime Ministers ? although, there was no real choice. Finally, Mussolini also got the support of the Army, Nationalists and the Industrialists that gave him complete control over Italy. Every aspect and any position of power now supported Fascism and the Duce. Despite the slight failing in a few areas, the successes of propaganda far outweigh the failings. Mussolini achieved what he set out to accomplish with the use of propaganda. Now, although certain aspects, such as repression allowed Mussolini to maintain his control of society. Fundamentally, the main reason to why the Fascist gained and stayed in power was the complete utilisation of propaganda and within that the extraordinary power that the cult of the Duce had on Italians. ...read more.