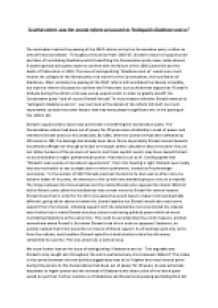 To what extent was the second Reform Act passed to &quot;extinguish Gladstone and co&quot;?

﻿To what extent was the second reform act passed to ?extinguish Gladstone and co? The motivation behind the passing of the 1867 reform act by the Conservative party is often an area of historical debate. Throughout the period from 1865-67, Disraeli?s nature of opportunism and aims of humiliating Gladstone whilst benefiting the Conservative party never really altered, if anything these aims grew easier to achieve with the failure of the 1866 Liberal bill and the death of Palmerston in 1865. The issue of extinguishing ?Gladstone and co? would very much involve the collapse of the liberal party or at worst for the Conservatives, the humiliation of Gladstone. Most certainly the passing of the 1867 reform bill humiliated the liberals incredibly, but was the reform bill passed to achieve this? Historians such as Alderman argue that ?Disraeli?s attitude during the reform crisis was purely opportunistic in order to greatly benefit the Conservative party ?and of course Disraeli himself. To truly measure whether Disraeli wanted to ?extinguish Gladstone and co?, we must look at the details of the reform bill itself, but most importantly consider the other factors that may have played a significant role in the passing of the reform bill. ...read more.

It?s most certainly true that Disraeli during this period acted on opportunism as the Liberals were so badly split the opportunity of siding with the Adullamites was there to be taken, and in no manner did Disraeli plan to ?extinguish Gladstone and co? in this period. However, it cannot be overlooked that Disraeli may have had this motive but not through the period of parliamentary reform, Disraeli was in fact much more interested in gaining political power for the Conservatives. The public pressure aspect can be seen as minimal in the passing of the reform act. The key points being that the replacement of Russell by Derby in 1866 was followed by an increase in public interest and pressure in the form of demonstrations and meetings. In July disturbances occurred at the famous Hyde Park, during the course of which a 1,400 yard stretch of railings was pulled down and destroyed. This was less violent than the events in Bristol and Nottingham in 1831. But, as with the First reform act, the threat of violence has been seen as a significant factor in forcing the pace of history, essentially history was repeating itself. Trevelyan agrees, referring to the solidarity between the middle and the working classes which characterized the agitation in the country over which bright presided in the autumn. ...read more.

In some aspects Walton is correct but the key fundamental point is missed. Granted the population rise was minor, but it still was a underlying ?background? issue that needed solving. Disraeli may not have passed the act due to this rise in inhabitants but it certainly put reform on alert and arguably was a catalyst for Disraeli wanting political and party gain. Overall, although there were several factors that arguably played a part, the strong desire to substantially benefit the Conservatives after being out of power for 20 years reflect the reason for Disraeli passing the 1867 parliamentary reform act. The drive for power was essentially always on Disraeli?s mind, if exploiting the liberals meant a chance of power, it was a certainty Disraeli would do what was necessary. Fundamentally, Disraeli ended up humiliating the liberals, not out of pure desire, but as an extra bonus for wanting to achieve power. Although, Seaman argues that ?Disraeli wasn?t in a desperate hurry for power?, however this is absolutely untrue. Disraeli unremarkably wanted power, hence the siding with the Adullamites. Had Disraeli not wanted power, he wouldn?t of taken a momentous risk of not only passing the bill in 1867, but more intriguingly actually making the bill extremely radical enough to gain support from most of the electorate. It is clear that Disraeli had only one aim in mind: to gain a majority government with his party. ...read more.