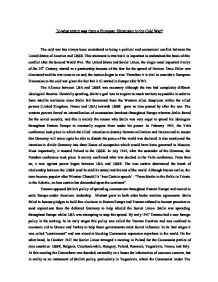 To what extent was there a European Dimension to the Cold War?

To what extent was there a European Dimension to the Cold War? The cold war has always been considered as being a political and economical conflict between the United States of America and USSR. This statement is true but it is important to understand the basis of this conflict after the Second World War. The United States and Soviet Union, the single most important rivalry of the 20th Century, started as a partnership because of the fear for the spread of Nazism. Once Hitler was eliminated and the war came to an end, the tension began to rise. Therefore it is vital to consider a European Dimension to the cold war given the fact that it all started in Europe after WW2. The Alliance between USA and USSR was necessary although the two had completely different ideological theories. Generally speaking, Stalin's goal was to acquire as much territory as possible in order to form satellite territories since Stalin felt threatened from the Western allies. Suspicion within the allied powers (United Kingdom, France and USA) towards USSR grew as time passed by after the war. ...read more.

In its later stages it was called "containment" and was aimed at blocking Communist expansion anywhere in the world. On the other hand, In October 1947 the Soviet Union arranged a meeting in Poland for the Communist parties of nine countries: USSR, Bulgaria, Czechoslovakia, Hungary, Poland, Romania, Yugoslavia, France, and Italy. At this meeting the Cominform was founded, ostensibly as a house for information of common concern, but in reality as an instrument of Stalin's policy, particularly in Yugoslavia, where the Communist leader Tito was adopting independent policies. By 1948 communism prevailed in Czechoslovakia which then in reality turned in to a Soviet Satellite state. The most significant event of the years just after WW2 was the Berlin Blockade. In June of 1948, Stalin ordered the blockade of West Berlin's roads and railways. There was no way of travelling by land into the city. The only access to West Berlin was through a 20-mile wide air corridor. The USA decided that it did not want to give up West Berlin. As a part of the Marshall Plan, the Berlin Airlift moved enough goods into West Berlin over 320 days to entirely support the economy of the city. ...read more.

By 1950 the siege of Berlin had ended and Stalin agreed to support China's desire to move south. North Korea was aided by China and Russia in its attack against South Korea which was aided by USA. The war ended without any real victory. North Korea eventually withdrew from the southern state. The war was a fight for containment by the USA even though the American government did not want to invade a Communist country for fear of retaliation by the Soviets or the Chinese. In 1953, Stalin's death marked a temporary thaw to the cold war and eventually the relaxation of political and economical controls led the eastern Europeans to demand for more freedom. The next year, Khrushchev denounced Stalin's policies. In addition, as was noted in the beginning of the essay, it is essential to categorize the war between USA and USSR as being mostly based on European grounds. It was a game of war played on a European board which then eventually converted into a global dimension. All of the events, which occurred in the years just after the Second World War, are of vital correlation to the cold war since the events themselves are actually the war itself. ...read more.