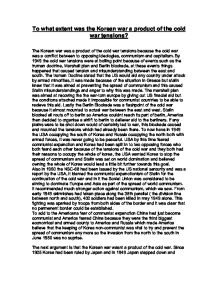 To what extent was the Korean war a product of the cold war tensions?

To what extent was the Korean war a product of the cold war tensions? The Korean war was a product of the cold war tensions because the cold war was a conflict between to opposing ideologies, communism and capitalism. By 1949 the cold war tensions were at boiling point because of events such as the truman doctrine, Marshall plan and Berlin blockade, at these events things happened that caused tension and misunderstanding between the east and south. The truman Doctine stated that the US would aid any country under attack by armed minorities, it was made because of the situation in Greece but stalin knew that it was aimed at preventing the spread of communism and this caused Stalin misunderstandings and anger to why this was made. The marshall plan was aimed at recoving the the war-torn europe by giving out US finacial aid but the conditons attached made it impossible for communist countries to be able to recieve this aid. ...read more.

Also in 1950 the NSC-68 had been issued by the US national sercurity and was a report by the USA, it blamed the communist expanctionism of Stalin for the continuation of the cold war and in it the Soviet Union was considered to be aiming to dominate Europe and Asia as part of the spread of world communism. It recommended much stronger action against communism, which we saw. From early 1949 skirmishes had taken place along the 38th parallel ( the division line between north and south), 400 soldiers had been killed in may 1949 alone. This fighting was sparked by troops from both sides of the border and it was clear that no permenent border could be established. To add to the Americans fear of communist expanction China had just become communist and America feared China becasue they were the third biggest economical and armed county to America and Russia which made America believe that the keeping of Korea non-communist ...read more.

and to have this either the north or south would have to invade the other side and this happened in June 1950. But this isnt a very strong argument against the matter of it not being a product of the cold war tensions because Kim IL Sung was a communist leader and Syngman Rhee was Capitalist leader which once again led back to the cold war, Communism vs capitalism. So i belive that the Korean War was almost purely a product of the Cold War becasue of it being once again Russia vs America and the tension of the Cold War were so deep that no decisions or agreements could be made between the two countries. Even though Korea wanted to be unified with no global influnce the dictators of the north and south were either capiltalist or communist which meant that these two dictators wouldnt be able to reach an agreement with each other because of the Cold War tension. ...read more.