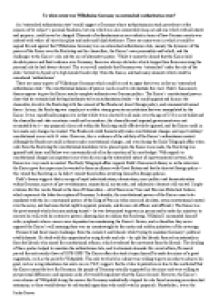 To what extent was Wilhelmine Germany an entrenched authoritarian state?

ï»¿To what extent was Wilhelmine Germany an entrenched authoritarian state? An ‘entrenched authoritarian state’ would suggest a Germany whose authoritarianism took precedence at the expense of its subject’s personal freedoms, but one which was also immovably deep-set and one which with all intents and purposes, could never be changed. Elements of authoritarianism are evident in terms of how German society was imbued with values of strict discipline and order and blind obedience. There are many ways in which it could be argued for and against that Wilhelmine Germany was an entrenched authoritarian state, namely the dynamics of the power of the Kaiser over the Reichstag and his chancellors, the Kaiser’s own personality and beliefs, and the challenges to the Kaiser’s rule and the rise of alternative parties. Whilst it cannot be denied that the Kaiser held absolute power and final credence over Germany, there was always obstacles which stopped him from exercising the personal rule he had always desired. This essay will conclude that Germany was ‘entrenched’ under the rule of the elites ‘behind its façade of a high-handed leadership’ from the Kaiser, and had many elements which could be considered ‘authoritarian’. There are many aspects of Wilhelmine Germany which could be used to argue that it was in fact an ‘entrenched authoritarian state’. The constitutional balance of powers can be used to substantiate this view. Rohl’s Kaiserreich theory appears to give the Kaiser nearly complete authority over German politics. The Kaiser’s constitutional powers show that he certainly had the legal authority to be an authoritarian leader – he could appoint and dismiss the chancellor, dissolve the Reichstag with the consent of the Bundesrat, direct foreign policy, and command all armed forces. ...read more.

The status of the army also substantiates Wehler?s view. Their status had been raised massively by the Unification Wars (Denmark in 1864, Austria in 1866, and France in 1870), and they were essentially Prussian. The oath of loyalty which officers took was of loyalty to the Kaiser rather than the state, and the military elite had great social status. The army were virtually independent of the Reichstag and were not constrained by annual approval since the military budget had a five year grant and so senior officials could do as they pleased. The army officers were conservative and unsympathetic to democracy, remaining a conservative right wing force which glorified its traditional values and resisted political modernisation. They were a strong political force, exemplified by the fact that the Schlieffen plan was largely left unquestioned, the army bill?s rejection caused the dissolution of the Reichstag, and that senior army officials practically ousted the Kaiser and Chancellor during World War I. As the Kaiser was the supreme commander of the armed forces, the Kaiser and the army can be seen as strongly interlinked, and in a way the immense power of the Kaiser was largely used for the protection of the army and similar institutions. The fact that senior members of the army were also the Kaiser?s advisors, combined with the knowledge of the Kaiser?s personality, strongly suggests that the army had a great amount of control over Reich politics, perhaps even to the extent of authoritarian control. Another justification for the view that Germany was ran by the elites can be seen when considering the treatment of Caprivi by Wilhelm II and his advisors. ...read more.

However, army leaders were resolute against political interference in military matters and were without political sense or ability and so were aloof in worldly affairs. Pressure groups also exerted a disproportionate amount of political influence, for example the Navy League had 2 million votes and the Agrarian League 333,000 ? this shows instability because of the inability of the political structures in place (the Reichstag) to be independent, and instead was at the mercy of pressure groups. To conclude, the Kaiser had immense authority over German politics but very little real power. His constitutional privileges were used for the protection of established imperial elites, which only appear sometimes to show him as a sole authoritarian leader on the account that he had the same interests as other elite members of society. Although some progressive legislation was enacted in this period, this can be seen as having been permitted because it did not harm the elites. Examples from later in Germany?s history show that the elites managed to maintain their critical influence over the direction of German politics, confirming that their authoritarian rule was ?entrenched? and ?authoritarian?. A combination of internal and external influences on the Kaiser, as well as his own ineptitude to deal with social and political pressure and choice meant that only in his head would he have ever been able to have complete authoritarian, semi-absolutist rule over Germany. His personal problems and personality defects and the external influence of left wing, social democrats? revolutionary beliefs (the Marxist faction) were all contributory to the Kaiser being entrenched de jure only - in de facto terms, he was never strong, intelligent or able enough to command completely authoritarian rule. Therefore, the balance of power rested with the forces of conservatism, although their right to govern did come under threat at times from the forces of change. Sasha Groves ...read more.