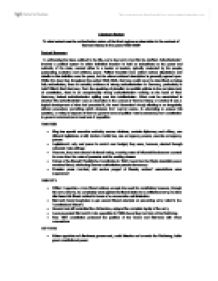 To what extent was the authoritarian nature of the n**i regime an aberration in the context of German history in the years 1848-1949?

Literature Review To what extent was the authoritarian nature of the n**i regime an aberration in the context of German history in the years 1848-1949? Factual Summary In addressing the issue outlined in the title, some key terms must first be clarified. Authoritarianism involves a political system in which individual freedom is held as subordinate to the power and authority of the state, centred either in a leader or leaders, typically unelected by the people, possessing exclusive and arbitrary power. Political theorists have added various stipulations and details to this definition over the years, but the aforementioned description is generally agreed upon. While it is clear that, throughout the period 1848-1948, Germany could never be described as being fully authoritarian, there is certainly evidence of strong authoritarianism in Germany, particularly in Adolf Hitler's n**i Germany. From the quashing of pluralism to racialist policies to the complete lack of constitution, there is an unequivocally strong authoritarianism working at the heart of n**i Germany, indeed authoritarianism spilling over into totalitarianism. What must be ascertained is whether this authoritarianism was an aberration in the context of German history or whether it was a logical development of what had preceded it, the word 'aberration' simply alluding to an irregularity without precedent, something which deviates from normal course. ...read more.

In short, the state had become synonymous with the economy itself. Balfour feels that the authoritarian elements in n**i Germany spilled over into totalitarianism, and he makes a point of contrasting the traditional authoritarianism in Germany against the brutal totalitarianism of n**i Germany. Indeed, concerning the introduction of laws which secured individual personal liberty between 1872 and 1883, he stated that Germany had its own form of Liberalism, or 'Rechstaat', which replaced the previously authoritarian state, 'Obrigkeitstraat'. This seems to go against the theory of Sonderweg. Adam feels that Vansittartism, a wartime sentiment which warned of a pattern of German aggression so deeply rooted in its history that Hitler wasn't an aberration, but a logical development of this aggression, emphasised several key facets which supported the theory of Sonderweg: cultural and political conditioning toward authoritarianism and militarism, popular support for the n**i regime, and the weakness of the German opposition, albeit only when stripped of its wartime polemic. A. J. P. Taylor feels that, due to the lack of national middle class in Germany (and the opportunity passed up in the first years of Charles V) meant that there was a continuous, uninterrupted and steady advance of authoritarianism and absolutism from the early 16th century till the late 17th century. ...read more.

A. J. P. Taylor concedes this: "I had taken the line, perhaps somewhat exaggerated by wartime feelings, that Germany had not been democratic even in Weimar Germany and the Hitlerism, far from being an aberration, grew out of what had come before". While his point is valid in some ways (especially considering the role of Article 48 in enabling Hitler), the Sonderweg theory does not seem realistic. Adam's fairly objective account of Vansittartism takes into account that it shows evidence of continuities only when stripped of its "wartime polemic". Maybe the pro-Sonderweg argument, then, is fuelled too much by wartime feeling to be fully justified. It seems that the pro-aberration argument is more accurate and an easier position to justify, as solid proof is used to highlight discontinuities between Imperial Germany and n**i Germany. It may be most prudent to say that, while elements of authoritarianism were certainly existent throughout the period, and while certain elements could be observed throughout, the scale of authoritarianism in n**i Germany was unprecedented, with Imperial absolutism being replaced by Hitler's iron totalitarianism, making the authoritarianism in Germany an aberration only in terms of its scale, with certain continuities from Imperial Germany, but not as many as the Sonderweg argument relies upon. ...read more.