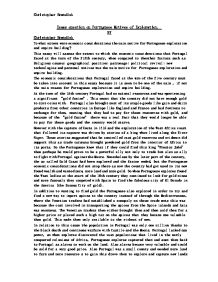 To what extent were economic considerations the main motive for Portuguese exploration and empire building?

Essay question on Portuguese Motives of Exploration. BY Christopher Brandish To what extent were economic considerations the main motive for Portuguese exploration and empire building? This essay will assess the extent to which the economic considerations that Portugal faced at the turn of the fifth century, when compared to the other factors such as Religious causes; geographical position; patronage; political revival; new technologies and personal motives was the main motive for Portuguese exploration and empire building. The economic considerations that Portugal faced at the turn of the five century must be taken into account in this essay because it is seen to be one of the main , if not the main reason for Portuguese exploration and empire building. At the turn of the 15th century Portugal had no natural resources and was experiencing a significant "gold famine". This meant that the country did not have enough gold to mint coins with. Portugal also brought most of its staple goods like gain and dairy products from other countries in Europe like England and France and had few items to exchange for them, meaning that they had to pay for these resources with gold, and because of the "gold famine" there was a real fear that they would longer be able to pay for these goods and the country would starve. However with the capture of Ceuta in 1415 and the exploration of the West Africa coast that followed its capture was driven by stories of a king whom lived along the River Niger. These stories suggested that he controlled vast gold reserves and evidence did support this as trade caravans brought powdered gold from the interior of Africa to its ports. So the Portuguese knew that if they could find this king "Prestor John" then perhaps he would prove to be a powerful ally not only to trade but also an ally to fight with Portugal against the Moors. ...read more.

A peace treated between Portugal and Castile meant that Portugal now did not have to worry about an invasion or any hostilities being carryout out against them by Castile and so could now turn their focus to exploration. These two factors that were resolved had now created a more outward looking Portugal A finial political factor would be the Personal Political Motivations of Henry the Navigator. Henry the Navigator was a key player in pursing over-seas exploration, this was due to the fact that he was the 3rd in line for the Portuguese throne and therefore his ambitions for power and had to lie elsewhere because he knew if he didn't he would just pass though history as a forgotten monarch. So this motive leads him to look to exploration as a way of putting his name in the history books (and gaining some power and respect along the way). Although Henry didn't actually explore himself he encouraged other people to do so and invested money in these voyages. The need for good Political stability, the Political rivalry with Castile and the Personal Political Motivations of Henry the Navigator directly link to the economic considerations that Portugal faced. This is because that even after they had political stability Portugal was still a poor nation and lacking in resources thanks to the wars with Castile and the "Gold famine". Also once Portugal and Castile were as peace the Political rivalry between them now related to how rich they were and so to try and gain the advantage over Castile, Portugal needed to be wealthier than Castile and the only way to do this was though exploration. It could also be said that even if Henry the navigator encouraged people to explore because there was no economic need to they might not have, or might not have got backing from merchants or the monarchy to do so. ...read more.

Perhaps it was another factor like the economic considerations of Portugal that spurred these explores to explore and thanks to the advancements in technology it was easier and safer than it would have been before but perhaps really it was down to another motive and not just down to the Technology one. To conclude this essay has stated the motives for Portuguese exploration and empire building and now it will state that it is the belief of this essay that the Economic considerations were the main motives for Portuguese. Economic considerations were the main motives for Portuguese exploration because these considerations such as the "gold famine" and Portugal's lack of natural resources really drove Portugal to find and seek out these new lands (if not only for their own gain). If it wasn't for the rewards or the encouragements, or even the backing of the monarchy or the Merchant class of these Voyages of exploration, then the sailors might not have been so keen to explore because it could have been seen as too dangerous or perhaps pointless to explore if the country was already rich already .Also the economic motive does also underline all the other motives because Portugal went to war with the Moors and the natives perhaps not just because of religion or because they had the technology to do so but because Portugal needed the resources that those land contained. The religious factor can also be seen as a sort of cover-up or as an excuse to hide Portugal's true motive. Money. In addition to this the Geographical position of Portugal actually meant they had few resources and because of this the country was very poor, this in turn led to the need for exploration. As you can see the economic factors of Portugal feature in many, if not all of the motives and is the motive in the foreground that throughout all the years of the age of exploration and especially through the early ones drove not just Portugal but many, if not all the European nations to explore and to create their own empires Christopher Brandish ...read more.