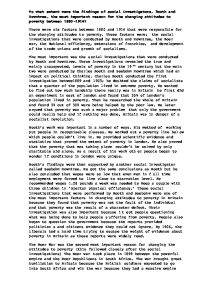 To what extent were the findings of social investigators, Booth and Rowntree, the most important reason for the changing attitudes to poverty between 1880-1914?

To what extent were the findings of social investigators, Booth and Rowntree, the most important reason for the changing attitudes to poverty between 1880-1914? There were six factors between 1880 and 1914 that were responsible for the changing attitudes to poverty. These factors were: the social investigations that were conducted by Booth and Rowntree, the Boer war, the National efficiency, extensions of franchise, and development of the trade unions and growth of socialisms. The most important was the social investigations that were conducted by Booth and Rowntree. These investigations revealed the true and mainly unsuspected, levels of poverty in the 19th century but the main two were conducted by Charles Booth and Seebohm Rowntree which had an impact on political thinking. Charles Booth conducted the first investigation betwee1889 and 1903; he doubted the claims of socialists that a quarter of the population lived in extreme poverty. He wanted to find out how much hardship there really was in Britain he first did an experiment in east of London and found that 35% of London's population lived in poverty. Then he researched the whole of Britain and found 3% out of 30% were being helped by the poor law. He later argued that poverty was such a major problem that only the government could really help and if nothing was done, Britain was in danger of a socialist revolution. ...read more.

They packed Boer women and children to concentration camps where many of them died from disease. The British literally starved the commandos into submission. The war was a great shock to Britain's confidence. The citizens of Britain searched for answers to why it took them three years to lose to Boer Farmers. The quality of soldiers was blamed for the poor British performance in the war. It was found that 40% of the military forces were unfit and most were suffering from poverty - related illnesses such as rickets. This was because half of the men in the army were pulled from the poor areas of Britain. This showed that an imperial power like Britain was producing an unfit workforce and as well as an unfit army because of the poverty that was taking place. In the social investigation that were conducted by Booth and Seebohm they produced facts and statistics that there was poverty that was taking place in Britain, but the Boer war showed physical evidence; that was being seen all over the world and this even explained how countries like Germany were overtaking Britain in economic growth. The Boer war was also important because it gave evidence that Britain was not doing enough to help the poor in society. Some argued the deteriorating British economic performance and the Boer War were proof of British decline. ...read more.

Activities of unions remained curtailed and the size of unions stayed small. However, a series of laws in the 1870s gave more rights to unions and they began to grow in size and influence. First major strike was on the London dorks in 1889. Between 1892 and 1900 memberships grew rapidly and this resulted in small craft unions being replaced by large new unions that represented unskilled and semi-skilled workers. Employers responded in lock-outs, so the unions resulted to looking to the parliament for protection from employers and unemployment. Although a majority of the unions had voted to conservatives and Liberals, many thought that the government wasn't doing a lot to help the working class, and this resulted in a lot of pressure on the conservatives and Liberals. In conclusion by the 20th century, poverty in Britain had been highlighted by first the social investigation which were conducted by Charles Booth and Seebohm Rowntree (the scale of poverty that they identified was shocking to most citizens in Britain). Secondly the Boer war made everyone realise that a change need to be made to the society which resulted in the national efficiency which demanded a healthier population that would produce a good work force and soldiers. Political thinkers and new voters also demanded such changes. Together all the important factors that helped change the attitude towards poverty in Britain made the sate increase its role in organising society in order to improve it. The Liberal party would begin to tackle the huge poverty that existed in Britain. ...read more.