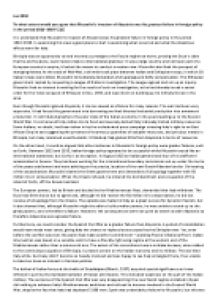 To what extent would you agree that Mussolinis invasion of Abyssinia was his greatest failure in foreign policy in the period 19221939?

The European powers, led by Britain and backed by her Mediterranean fleet, demanded that Italy withdraw. The Duce had little choice but to agree and, although he did receive the 50 million lire compensation, he did not receive a full apology from the Greeks. The episode was hailed in Italy as a great success for dynamic Fascism, but it also showed that, although Mussolini might be able to bully smaller powers, he was unable to stand up to the great powers, and is therefore a failure. However, the consequences were not quite as severe as with Abyssinia so therefore Abyssinia was a greater failure. Furthermore, we could consider the Spanish Civil War as a greater failure than Abyssinia. A period of consolidation would have made most sense, giving Italy the chance to replace losses caused by the Ethiopian war. Yet, even before the conflict was over, Mussolini had made another commitment ? assisting Franco?s National Front. Italian intervention was based on a sensible wish to have a friendly right wing regime at the western end of the Mediterranean rather than a communist one. ...read more.

Italy, exhausted by its commitments in Ethiopia and Spain, could do little but accept its new ally?s expansion southwards. A powerful Germany with a frontier bordering Italy?s German-speaking provinces was a high price to pay for adventures elsewhere. It made Mussolini increasingly dependent upon German goodwill. The Pact of Steel was singed in May 1939. It may have been intended to promote Mussolini?s ambitions in Africa and the Mediterranean but it also threatened to trap a militarily unprepared Italy into supporting German expansionist plans in northern Europe. With the collapse of the Stresa Front Mussolini became more isolated he was forced to turn towards Germany for increased help and support by 1939. This alliance would prove disastrous in the Second World War, suggesting that Mussolini?s closer relations with Hitler were a foreign policy failure. In conclusion, I believe Mussolini?s invasion of Abyssinia was his greatest failure in foreign policy in the period 1922?1939 because it was the catalyst event that led to all his other failures during this period, such as the Spanish War and his relations with Germany. ...read more.