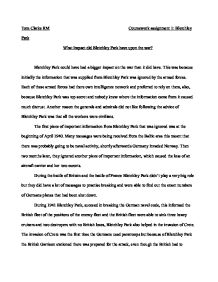 D-Day for d day lots of information was needed from Bletchley Park about the German forces in France were needed, so the British forces knew where to attack, also Bletchley Park found out that the Germans thought the attack at Normandy was just a diversion from a main attack at Calais with the help of Bletchley Park they made the Germans think that was true. After D day Bletchley Park was not needed much because the war was as good as won but through out the war Bletchley Park and all the information proved invaluable especially the when they broke the navel code, if it had not been broken Britain would have continued to lose supply ships and might have been forced out of the war. ...read more.