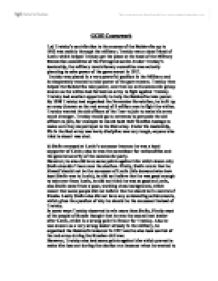 Trotsky's contribution to the success of the Bolsheviks up to 1922

GCSE Coursework 1.a) Trotsky's contribution to the success of the Bolsheviks up to 1922 was mainly through the military; Trotsky was a close friend of Lenin which helped Trotsky get the place at the head of the Military Revolution committee of the Petrograd soviet. Under Trotsky's leadership, the military revolutionary committee was actually planning to seize power of the government in 1917. Trotsky was placed in a very powerful position in the Military and he desperately wanted to take power of the government. Trotsky then helped the Bolsheviks take power, and then an anti-communist group known as the whites had formed an army to fight against Trotsky. ...read more.

However, he also did have some points against him which shows why Stalin shouldn't have won the election. Firstly, Stalin wrote that he himself should not be the successor of Lenin (this demonstrates how loyal Stalin was to Lenin), he did not believe that he was good enough to take over from Lenin, he did not think he was as good as Lenin, also Stalin came from a poor, working class background, which meant that some people did not believe that he should be in control of Russia. Lastly Stalin also did not have any outstanding achievements, which gives the question of why he should be the successor instead of Trotsky. ...read more.

Also he was accused of trying to split the communist party, this lost him a lot of support because people were beginning not to trust him. Stalin came out as the successor because he worked with other parties to try to knock Trotsky out of the race, Stalin knew that Trotsky was the most threatening out of all the other parties, so Stalin thought that if he could knock Trotsky out by going against Trotsky's idea of war communism (also Trotsky wanted to industrialise Russia quickly, whereas Stalin believed that Russia should industrialise slowly), Trotsky lost a lot of support because of that, and finally he lost the run for leader. ...read more.